Gaming on the go has become a massive part of people’s lives. Whether that be on your mobile phone, laptop or a handheld gaming console, it’s a window into the world of gaming that can be accessed almost anywhere. While the current climate may have lessened our opportunities to use handhelds remotely, the popularity of the Nintendo Switch has exploded during the pandemic. That’s largely thanks to the popularity of Animal Crossing.

While it’s true that Nintendo won the handheld wars of the 1990s and early 2000s, their grey slab of pure joy was never short of competition. In fact, there were countless consoles that lost valiantly in the race to become handheld king.

Let’s have a look back at three handheld consoles you’ve probably forgotten about. 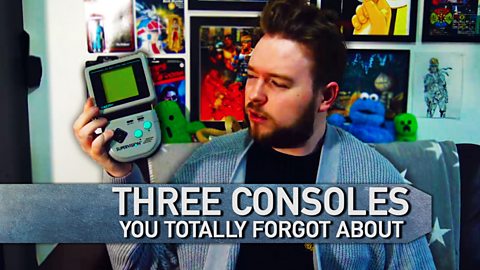 A look at three handheld consoles from the 90s that you’ve probably forgotten about.

The Quickshot Supervision or the Watara Supervision, as it was known overseas, is one of the earliest competitors to the Game Boy. It first emerged in 1992.

The console has a flexible waist which is pretty eccentric. Unfortunately, the rest of the console is pretty standard. The Supervision has a two button layout and a monochrome, dot-matrix screen. Unlike most modern devices, its screen doesn’t have backlighting.

If you thought the Game Boy screen was hard to see then the Supervision is that after twelve pints and a shot on a merry-go-round. It’s essentially a blurry mess.

Another reason for this console's demise is its uninspired library of games. Sure, the game choice is fine but the gameplay doesn't compete with Italian plumbers and Pocket Monsters.

The Neo Geo is a video game brand by Japanese developer SNK.

SNK were renowned for their various types of cabinet arcades during the 90s, as well as a rather expensive line of home consoles. They also had a stab at taking on the Game Boy with their Neo Geo Pocket. This nifty little rectangle made some fierce competition for Nintendo’s long reigning champion.

The Neo Geo Pocket’s impressive library has SNK classics like Metal Slug and even Sonic the Hedgehog. There’s definitely an air of quality about the Neo Geo Pocket so why did it fail to grab some of the plaudits from Nintendo? Well, it could be bad timing with a strange new monster catching craze emerging on the Game Boy. Maybe, if it wasn’t for Pikachu and the gang, the Neo Geo Pocket could have been a roaring success.

The last console on today’s agenda might spark some buried memories from adverts of old. To some it’s an extraordinary piece of tech that managed to squeeze the power of a PlayStation into a mobile phone. To others, it’s a weird taco with an identity crisis.

Launching in 2003, cellular colossus Nokia’s brave step into the console market created one of the first opportunities to play proper games on a mobile phone.

While this sounds like an ingenious idea, Nokia’s execution was the console’s doom. Was it a mobile phone? Was it a console? Did it make calls? Where did the games go? The console didn’t answer any of these questions well, and it ended up being a bad phone and a poor gaming platform.

Even a revised model, addressing all the previous issues, couldn’t unseal the N-Gage’s fate

The console's button layout is essentially a tiny d-pad and a number pad which really does the bare minimum. This makes it feel less like a real console.

To insert a game you have to give the phone a complete dressing down, removing the back cover and the battery just to put the cartridge in.

Despite the N-Gage’s failings, it’s actually a fairly advanced system with enough power to have the likes of Tomb Raider in its library. The screen, unlike the previous two consoles, is actually backlit so the visuals are that bit clearer.

While the device itself was fairly impressive, its convoluted design and expensive price point meant that, by the time the Game Boy Advance burst onto the scene, the N-Gage was irrelevant. Even a revised model, addressing all the previous issues, couldn’t unseal the N-Gage’s fate.