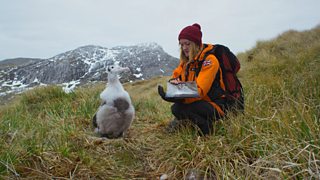 I worked on Bird Island research station, just off mainland South Georgia, for two and a half years as a zoologist, studying the albatross populations there. It was a real privilege to get to work so closely with such iconic birds and to get to see them throughout the seasons.

From the pre-breeding period, where the albatross adults spend hours displaying to one another and reaffirming their pair bond, to the busy egg laying and hatching period in the summer, to the chick-rearing period where lonely chicks are left for days at a time on their nests throughout the cold winter, and finally to the moment at which an albatross chick fledges the nest and takes to the skies for the first time to go out to sea, not to return to its natal colony for years to come.

Bird Island has one of the longest datasets of any animal in the world with decades of valuable data collected, and it is these long-term datasets which help us understand why seabirds as a group are currently undergoing drastic declines. There are many potential factors why we have seen declines of up to 60% in some albatross species from across South Georgia. One factor is being caught in fishing operations in waters much further afield from South Georgia.

South Georgia has a well-managed fishery, however further afield regulations on preventing albatross by-catch are not as well enforced. Another potential reason is because of climate change inducing sea temperature changes which in turn affect the birds’ food supply. But through my routine monitoring of the albatross colonies I was shocked to see first-hand another potential threat on the horizon for albatrosses at South Georgia: marine litter. 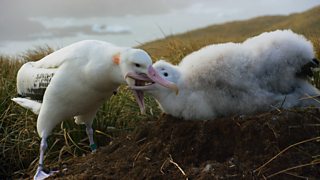 One of our tasks as zoologists on Bird Island was to pick up any litter we found washed up on the beaches and amongst the bird colonies. We found a plethora of everyday plastic items including: food packaging, cling film, rubber gloves, polystyrene foam, toothbrushes, plastic bottle caps, and packing banding. Indeed, packaging banding was something the seal zoologist at Bird Island had to deal with more commonly, as they had to remove packing banding from around Antarctic fur seal’s necks several times per season – a terrible sight.

However, I was equally shocked to come across pellets that albatross chicks had regurgitated just before they fledge and to find in amongst it evidence of plastic ingestion.

The chicks get the plastic from their parents, and the parents will have fed on the plastic when out at sea. It’s awful to think that the parent will have spent potentially up to a fortnight feeding at sea, travelling thousands of miles from the nest, only to bring back plastic in amongst any fish or squid items it managed to find.

Thankfully, chicks can get rid of some of their plastic load before they fledge. However, what we have found on Bird Island will be an underestimation of what is being consumed by the albatross of South Georgia. We are only just starting to understand the implications of what ingesting plastic might mean to seabirds, and it is something that BAS and other scientists around the world are working hard to try to understand. 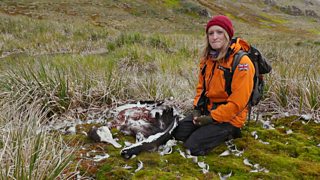 While I have seen plastic litter cause the direct death of some chicks (such as the tragic case of the toothpick rupturing the chick’s stomach), we should be equally worried about the sub-lethal effects: eating plastic instead of the food they should be eating has the potential to lower the general health and body condition of the birds. If the food supply is generally good and they are still getting enough of the types of food they need, then it’s possible a small amount of plastic wouldn’t cause an enormous problem to their population as a whole. However, when food resources are lower, birds with plastic loads in their stomachs may be worse off. Plastic pollution is yet another pressure being put on our seabirds and something that we should be able to tackle.

Personally, from seeing the plastic problem first hand I now try my best to reduce my use of plastic packaging, particularly when it’s single-use and non-recyclable. We can all make choices to reduce our consumption - to not buy plastic packaged fruit and vegetables, not to use disposable straws, cutlery, or plastic bags, and to make sure any products we use do not contain microplastics within them. However small a step I can make, it is at least a start in trying to tackle this problem. This is a global problem and is also very close to home - birds in UK waters are also being affected with 95% of northern fulmars (our very own mini-albatross in the northern hemisphere!) recorded as having plastic in their stomachs. But it’s not all bad news. There is hope on the horizon, and I feel society now wants change, having seen how the ocean is choked with plastic. I hope that we can embrace this problem collectively and preserve our oceans for the future.

So where is all the plastic coming from?

Whilst plastic from industry, including plastic pellets, is seen in our oceans, a lot of the plastic found is consumer-based plastic. It comes from sources at sea (shipping, fishing, offshore industries, recreational vessels), as well as sources at land. Land-based sources can include from litter in rivers flowing into the sea, direct dumping and run-off near coasts, from the sewage system, or from poor waste management. 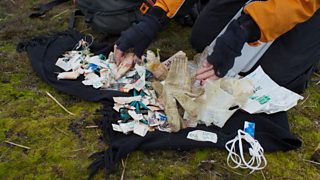