To find out the truth behind the famous outlaw of Sherwood Forest, visit Robin Hood and his Historical Context, part of the BBC History site. 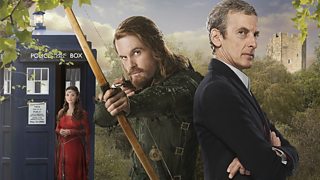 The read through for Robot of Sherwood took place on Thursday, 20 March, 2014. The main shoot for the episode started on the following Tuesday and finished on Saturday, 3 May.

The Sheriff is played by Ben Miller, well-known as one half of the comedy double act, Armstrong & Miller. Alexander Armstrong starred as Reg in The Doctor, the Widow and the Wardrobe and was the voice of Mr Smith in The Sarah Jane Adventures.

Trevor Cooper (Friar Tuck) played Takis in the Sixth Doctor adventure, Revelation of the Daleks. And if Ian Hallard – here starring as Alan-a-Dale – looks familiar, it’s possibly because he played Richard Martin in An Adventure in Space and Time, the drama that chronicled the early days of Doctor Who.

“What about Mars? The Ice Warrior hives!” The most recent Ice Warrior adventure was Cold War, an Eleventh Doctor story which, like Robot of Sherwood, was written by Mark Gatiss. 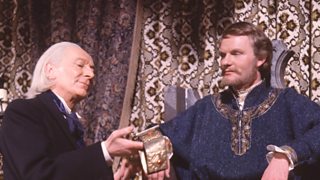 The Doctor name checks Richard the Lionheart during his battle with Robin. He’s referring to Richard I of England, the 12th Century monarch he encountered in the 1965 adventure, The Crusade.

At one point the Doctor suspects that he and Clara are trapped in a miniscope. In Carnival of Monsters the Time Lord and his companion really do get trapped in a miniscope and we discover that the Doctor had previously tried to get them banned. In that story we also learn they were devices intended for entertainment – externally they were very small but due to their futuristic design they were able to maintain many different landscapes and locations, as well as captives, internally. People watched the miniscope to see how the captives coped and to liven up the entertainment, the miniscope owner would set terrifying creatures, like the drashigs, against them or placed certain scenarios in a time loop.

The archery contest was staged in Caerphilly Castle, previously used in a number of episodes such as Nightmare in Silver and Vampires of Venice. Several scenes in the woods were shot in Fforest Fawr, near Caerphilly, a location that doubled for Germany in the Tenth Doctor adventure, The Stolen Earth / Journey’s End. 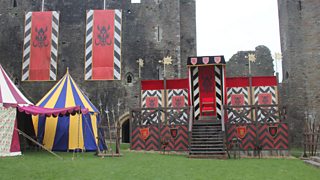 The Sheriff, perhaps inadvertently, quotes Shakespeare when he refers to the land as ‘this sceptred isle’. The description of England comes from Act 2, scene 1 of Richard II. When he demands to know, ‘Who will rid me of this turbulent Doctor?’ he’s echoing words attributed to England’s King Henry II who is said to have bellowed, ‘Who will rid me of this turbulent priest?’ in relation to his former friend, Thomas Becket.

He keeps Robin at bay with a spoon! This isn’t the first time the Doctor has got fancy with a spoon, though! In adventures such as The Greatest Show in the Galaxy the Seventh Doctor played the spoons with considerable skill and the Time Lord’s expertise in swordsmanship is long established, previously seen in stories including The Sea Devils and The Androids of Tara.