What’s the best way to help your dog lose weight? – The Trust Me Big Experiment

Obesity in pets is now the single biggest concern for their health and wellbeing. Well over half the dogs in the UK are overweight, and our cats and rabbits are getting fatter, too. A lack of exercise, too many treats and scraps off the table, and a lack of understanding of what an animal’s ideal weight should be, have all helped our pets pile on the pounds. 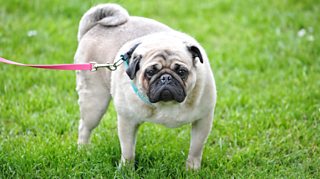 Obesity is now recognised as the single biggest problem affecting the health and welfare of all pets in the UK. So what can owners do to keep their pet’s weight in check?

If left untreated, what impact will it have on my pet?

Unfortunately, the complications of obesity mean that your pet may develop other issues as a result. These can include diabetes, increased blood pressure, breathing difficulties, arthritis, impaired liver function, poor coat quality, and issues with digestion, resulting in reduced life expectancy.

There have been countless human trials looking at the impact of diet and exercise on weight loss, but similar research has not been carried out in animals.

So what is the best strategy?

The Trust Me I’m A Vet team recruited 13 volunteers and their dogs to join a small, ethically approved, research trial at the University of Liverpool’s Weight Management Clinic, under the guidance of Professor Alex German.

Each dog was assessed by their usual vet, who then referred them on to Professor German and his team at the University.

Body weight, clinical history and temperament were all assessed and reviewed. Each dog was also given a Body Condition Score (BCS), which is judged by feeling the amount of fat coverage on the dog’s body and by identifying a narrowing of the body at the waist. A score between six and nine on this scale signifies a dog is overweight or obese. The average score for our dogs was 7.76.

The dogs were randomly assigned into two groups.

The first group was given a diet plan, specifically designed for each individual dog. Owners were required to weigh out a set amount of a prescribed dry food each day and instructed to feed only that amount to their dog.

No treats were allowed to be given during the trial.

Participants were asked to complete a diary over the study period and the owners reported back regularly to Prof German’s team. The group were asked not to alter their normal exercise plan.

An activity monitor was fitted to each dog’s collar 1 week prior to starting the study, and during week 7th week of 8-week trial.

The second group were tasked with a personalised exercise plan in which they increased their dog’s activity by at least a third. Practically, that meant, for example, increasing a 40 minute walk to an hour, or increasing the number of play sessions from 3 to 4.

The owners were given tips on the type of exercise they could try, and dogs were given an exercise toy. Diaries were kept over the 8 weeks of the trial, and regular contact was maintained between each participant and the university.

An activity monitor was fitted to the dogs’ collars 1 week prior to starting the study, and during week 7 of 8 of the trial.

In the diet group, the average weight loss the group achieved was 10%. All dogs dropped either one or two levels on the BCS score.

For the exercise group, the average weight loss the group achieved was 2%. Only one dog within this group dropped a level on the BCS score.

Our study indicates that a calorie-controlled diet for dogs is the most effective way to shed unwanted weight. The study also showed a surprising result: the activity of the dogs in the diet group increased, p, despite the fact that their owners had not altered their exercise schedule. This suggests that losing weight made the dogs naturally inclined to be more active.

A formal supervised weight loss plan was discussed with all participants in the aftermath of the experiment. 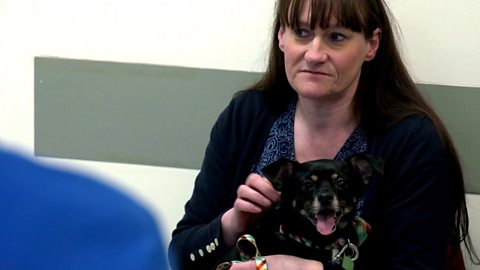 The owners confess to the treats they give their dogs