Surgeon Gabriel Weston travels to Virginia in the US to meet a team of surgeons trialling a new method to cure patients of tremor.

Around a million people in the UK suffer from tremor – an uncontrollable shaking. It can have many causes, such as the inherited condition Essential Tremor, or Parkinson’s Disease which can affect the brain in many ways. 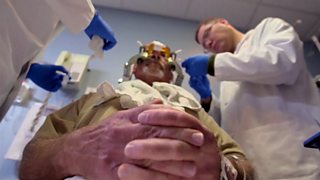 The cause of tremor, however, is usually the same – a faulty circuit within a part of the brain called the thalamus.

Treatment for this debilitating condition has until now either been a permanent course of drugs, which can have serious side-effects, or brain surgery.

At the University of Virginia, they are pioneering a new kind of treatment, which can destroy the tiny piece of brain tissue causing the tremor without even opening up the skull.

The surgery is done using ultrasound – simple sound waves, but concentrated so much that they can heat up cells until they die.

To do this the sound waves are focussed to a single point, just like using a magnifying glass to concentrate light beams on a point where they can burn. This concentrated point can be less than a millimetre in diameter, and the surgeons can position it with extreme accuracy using an MRI scanner to guide the beam.

The focussed ultrasound technique is already being used to treat conditions such as uterine fibroids in the UK, but getting the ultrasound to pass through the skull is more difficult.