Finnish conductor Anna-Maria Helsing was appointed Principal Guest Conductor of the BBC Concert Orchestra in November 2019. Helsing has gained an outstanding reputation with leading Scandinavian orchestras and opera houses. From 2010 to 2013 she was Chief Conductor of the Oulu Symphony – the first-ever female conductor at the head of a Finnish symphony orchestra. 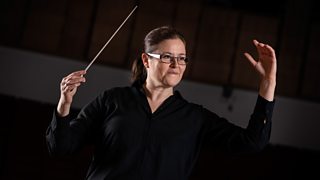 "I am both delighted and thrilled at the prospect of further developing my collaboration with the BBC Concert Orchestra as their new principal guest conductor. The orchestra, with so many high calibre musicians, offers exciting artistic opportunities and I can hardly wait to explore what we can achieve together. "

After her studies in the class of Leif Segerstam, the Finnish conductor was chosen to take part in the International Conductor’s Academy of the Allianz Cultural Foundation under the guidance of Esa-Pekka Salonen and Gustavo Dudamel. In 1999 she won the First Prize in the International Competition for 20th Century Music for Young Artists in Warsaw.

Anna-Maria Helsing received her violin diplomas from the Conservatory of Jakobstad/Pietarsaari. She has attended masterclasses with Jorma Panula, Vladimir Jurowski and John Carewe.

Anna-Maria Helsing feels a special affinity with the sound and style of modernism and contemporary music.