Ten things the Pyramids tell us about ancient Egyptians

Let’s get this straight… the pyramids were not built by aliens.

It’s been over 4500 years since the first pyramids were constructed, and there are over 100 in Egypt.

Each is an architectural marvel, but the largest is the Great Pyramid of Giza, built for King Khufu. It is 139m tall and made of over 2.3 million blocks of stone, each weighing several tons.

Originally it would have been encased in brilliant white limestone, literally dazzling onlookers with how it reflected the intense Saharan sunshine.

Awe-inspiring stuff. No wonder we find it hard to believe that people managed to build these ancient monuments without the help of modern machinery. But they did!

In You’re Dead to Me, Greg Jenner is joined by “space archaeologist” and Egyptology expert, Professor Sarah Parcak, and comedian Maria Shehata, to discuss these architectural marvels. Here's what they found.

You're Dead To Me host Greg Jenner is joined by Prof Sarah Parcak and comedian Maria Shehata to learn all about the magnificent Egyptian pyramids. We discover how and why pyramids were built, who constructed them, and how space archeology can help us discover and protect hundreds of pyramids and tombs that are yet to be found.

1. They were amazing mathematicians

Building a pyramid wasn’t just about heavy lifting. In ancient Egypt it was the job of scribes to plan how many blocks of stone needed to be quarried and transported to the site, and make sure that the sides of the pyramids were an even gradient. The Great Pyramid’s sides, for example, each have a consistent gradient of 52 degrees. The precision with which pyramids were constructed shows that these scribes were seriously skilled mathematical problem solvers.

2. Pyramid builders were kind of a big deal

If anyone involved in pyramid building has gained immortality it’s Imhotep, the designer of the first step pyramid at Saqqara. As well as being an ace architect, he was also a high-ranking royal official, priest, and physician. The ancient Egyptians revered him so much that he was later deified as a god. Filmmakers in the 1990s revered him in their own way – by resurrecting him as the flesh-eating villain terrorising Brendan Fraser and Rachel Weisz in The Mummy.

Imhotep, designer of the first step pyramid at Saqqara.

Pyramid builders developed serious muscles lifting all that stone, but these beefcakes weren’t chugging protein shakes. Remains of butchered ducks, sheep, pigs, and cattle in the workers’ village reveal that pyramid-building titans bulked-up on a steady supply of meat, plus bread and beer. Workers’ cemeteries also show that, while nasty accidents often happened, not all injuries were fatal and lots of people recovered from broken bones thanks to impressive medical care.

4. They were team players

The excavation of the well-provisioned workers’ village has proved that the pyramids weren’t built by enslaved workers, as is often claimed, but by skilled workers with plenty to gain from their labour. With team names like the ‘Drunkards of Menkaure’, worker gangs at pyramid sites seem to have enjoyed a rather congenial working environment. Graffiti left by some of these gangs suggests that they had a strong sense of identity and pride, as well as healthy competition with their rival builders.

The entrance to the tombs of the pyramid builders, Giza Necropolis

5. They were happy on the water

Today the pyramids at Giza seem at home in their sandy surroundings, but, when they were first completed, they would have been reflected in the waters of the Nile river, which back then was much closer to the site. Indeed, Egyptians built canals so that heavy stone quarried elsewhere could be easily transported to pyramid building sites. 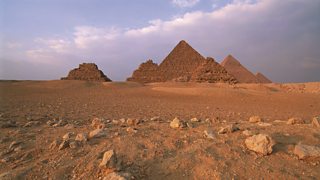 A complex of main and satellite pyramids

Pyramids could be part of a pyramid complex which included smaller pyramids (called satellite pyramids), causeways, and temples, where priests served the cult of the king.

7. They were obsessed with death

Getting thousands of people to spend decades building a tomb for one person might seem like a bit of a waste of time and resources. But it wasn’t just kings who invested in their afterlife. The pyramids at Giza are part of a huge necropolis and are surrounded by hundreds of tombs belonging to other important ancient Egyptians. Meanwhile, the workers weren’t enjoying such lavish funerals, but they would have expected to go straight into the afterlife as a reward for constructing their pharaoh’s sacred tomb. 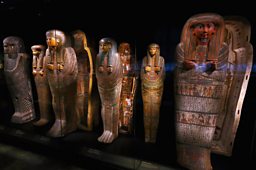 Ancient Egyptian kings were determined not to arrive in the afterlife empty-handed. But a pyramid is a fairly conspicuous place to bury treasure, and, in some cases, tombs were looted more or less as soon as they were completed. By the time modern archaeologists get on the scene, pyramid chambers are usually almost empty. Luckily, some ancient looters did record descriptions of the riches they nabbed in written confessions. Here’s what you could have won, Lara Croft!

9. Their reputation for elaborate security is misplaced

Ancient Egyptians could learn a thing or two from Hollywood about boobytraps. Archaeologists haven’t come up against any swinging axes, snake pits, or even basic trap doors. Tomb-raider-proofing measures, such as concealing entrances, or blocking passageways with (stationary) boulders (Indiana Jones breathes a sigh of relief), were as far as it went, and they were often ineffective.

As for the infamous Egyptian tomb curses, in reality these are very rare and tend to be more along the lines of a sign saying, ‘No Trespassing’, or even just, ‘I wouldn’t do that if I were you’.

There’s lots that archaeologists still don’t know about the pyramids and the people who built them. For example, there are chambers and shafts inside these mega-tombs that have archaeologists scratching their heads, and there is still debate over exactly how they were built.

It's ancient history with You're Dead To Me...