Can acupuncture be a painkiller? 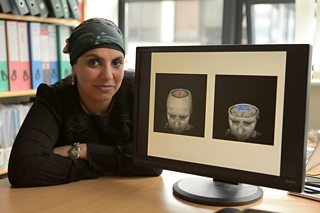 Medical acupuncture (based on the traditional Chinese medical practice) is becoming increasingly popular and is available on the NHS for some kinds of pain relief, including for chronic tension-type headaches and migraines. But what’s the evidence that it’s effective?

Saleyha visits the University of York’s Neuroimaging Centre, where she receives acupuncture while lying inside an fMRI scanner. The scanner measures what is going on inside her brain whilst acupuncture needles are inserted into her hand by Prof Hugh Macpherson, who has been carrying out this procedure on volunteers as part of a trial.

Saleyha’s brain scan, like those of Prof MacPherson’s other subjects, shows a deactivation (measured by a decrease in blood flow) in the limbic system inside the brain. The limbic system, known as the pain matrix, is the part of the brain believed to be responsible for the perception of pain.

Instead of stimulating the perception of pain, as you may expect, having needles stuck in her hand has appeared to reduce the activity of the pain matrix. It’s evidence of an effect that might explain how acupuncture could work as a painkiller, although it’s not evidence as to why it can cause this decrease in the pain matrix.

It’s possible that the needles may stimulate the nervous system to release neurotransmitters involved in pain-suppressing mechanisms – but it’s also possible that the changes in the brain are due to the placebo effect where the mere expectation that something will relieve pain results in a reduction in pain.

In fact, a review of the scientific evidence recently found that acupuncture was no better than a placebo in treating those living with low back pain and sciatica and the latest draft guidelines from the National Institute for Health and Care Excellence (NICE) no longer recommend acupuncture as a treatment for this kind of pain.

So while it does seem that acupuncture can have an effect on pain it’s likely to remain a subject for debate until we have more evidence of effectiveness beyond the placebo effect.