The iconic ruin of Dunluce Castle, perched dramatically on the cliffs of the North Antrim coastline, was once the late medieval stronghold of the powerful Gaelic Irish MacQuillan chieftains before being taken by the Scottish MacDonnell family in the mid 16th-century. A small town was established in the opening decades of the 17th-century by Randal MacDonnell, the 1st earl of Antrim, in the fields surrounding the castle. The settlement was to become the administrative centre of the vast MacDonnell estates in County Antrim during the era of the Plantation of Ulster. Randal also created formal terraced gardens beside his castle, set on the cliffs overlooking the Atlantic Ocean. 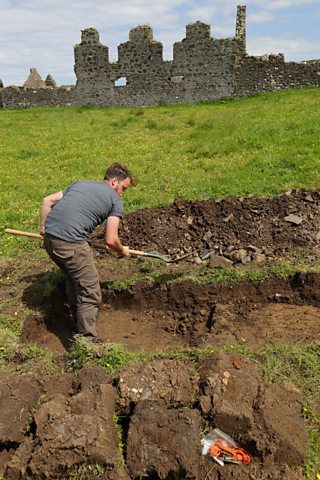 Exciting discoveries so far include previously unknown evidence of late medieval occupation outside the castle walls, which was then cleared to make way for the later town and gardens.

The town was burnt in January 1642, setting in motion a terminal decline which saw its abandonment by the 1680s. Since that time the exceptionally well preserved archaeological remains of the settlement have lain undisturbed below the grassy fields surrounding the castle. Only in recent years have archaeologists begun to investigate these remains, revealing for the first time in 350 years the original cobbled streets, market place and house foundations of the town.

This year the Northern Ireland Environment Agency, working with archaeologists from Queen’s University Belfast, have been undertaking evaluation excavations to assist in the planning for a major 5-year archaeological research excavation and conservation programme to reveal the buried remains of Dunluce’s lost town and gardens. The investigations at Dunluce are a significant opportunity to investigate an essentially intact early 17th century settlement, dating from a time of enormous transition and change in society.

This season’s dig has investigated the construction of the terraced castle gardens, the layout of the network of cobbled streets within the settlement and several of the original buildings which would have fronted onto these streets. Exciting discoveries so far include previously unknown evidence of late medieval occupation outside the castle walls, which was then cleared to make way for the later town and gardens. Interesting finds include a silver Queen Mary groat, minted in the 1550s, and a 17th -century seal matrix, possibly belonging to one of the Scottish merchants who would have lived in the town.” 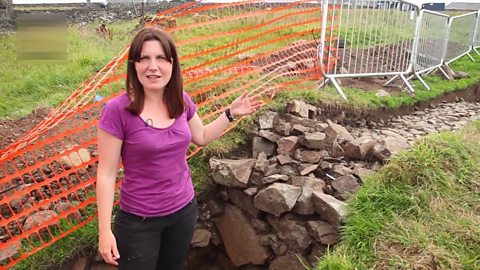 One of the Dunluce site directors, Grace McAlister, discusses the site. 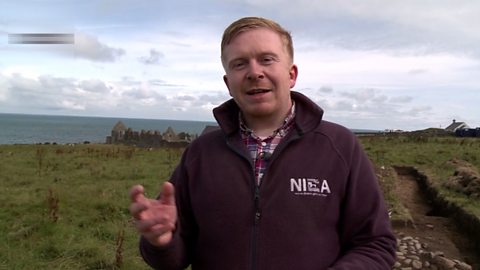 A castle not in isolation

Andrew discusses the town established in 1608 at Dunluce castle 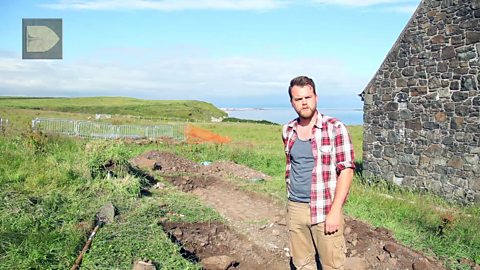 Cormac explains what they have found already: the gable wall and the cobbled streets.