Do you live in the British tornado alley?

When you think of tornados you probably imagine twisters moving across dust-bowls in the United States, but in fact the UK gets an average of 30-50 tornadoes a year. That’s more tornadoes per land area than anywhere else in the world (except – weirdly – the Netherlands.)

So have you been living in the UK ‘tornado alley’ without even knowing it?

In 2015, scientists at the University of Manchester mapped the UK’s tornadoes and estimated that the area from Berkshire into London had the highest likelihood of a tornado - one every 17 years.

Most of the tornados we get in the UK are small and don’t have much impact, but occasionally they can be big, as was the case in Birmingham in 2005.

That tornado lasted for around 10 minutes with wind speeds up to 145mph. It uprooted around 1000 trees, injured 19 people and had a cost of around £40 million.

But what’s it like to be in the path of one of the most powerful tornados? Paul Knightley is a storm chaser who travels to tornado alley in the US every year to seek out tornadoes.

On 31st May 2013, the tornado season was well underway and Paul and his team travelled to the town of El Reno, Oklahoma. They saw signs of super-cell development before a huge tornado started to form. The atmosphere was primed, the temperature was getting up to 31 degrees, the humidity was high and the risk of tornadoes was high. 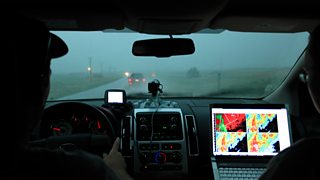 That tornado was around 2.6 miles wide - the widest in recorded history - and was packing wind speeds of 295mph (the second highest winds recorded on Earth). Normally tornadoes travel in a northeast direction but this tornado was slightly different in that initially it travelled southeast. Its abnormal path and rapid growth caught forecasters and storm chasers out – including Paul and his team.

They found themselves in the track of the tornado, which at that point was travelling towards them at about 50mph. Their attempt to outrun the tornado was hampered by strong winds being sucked into the storm – the inflow winds.

Storm chasing is clearly a dangerous hobby, but it is much more than that. Getting close to tornados can yield important meteorological data for forecast models, which can improve the warning systems for these somewhat unpredictable forces of nature.

Hear this entire episode of Under the Weather and subscribe.