Is it safe to reheat leftovers?

We all end up with leftover food that we don’t want to throw away (and reheated starchy leftovers can actually be healthier to eat), but on the other hand we dread food poisoning. About a million people a year get food poisoning – about half from our own cooking (with summer barbeques and Christmas leftovers being the biggest culprits) – and for about 100 people each year this can be fatal.

Food poisoning is usually caused by bacteria on food. The biggest culprit is not the perhaps more famous Salmonella, E. coli or Listeria, but Campylobacter, and it was recently found on 6% of the OUTSIDE of packaging of supermarket chickens and it can survive 1-2 hours on a kitchen surface, so it’s easy to spread it around. The problem is that whereas for Salmonella, tens of thousands of individual bacteria need to survive the hostile environment of your stomach to make you ill, for Campylobacter it’s only around 500. 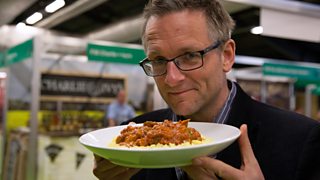 The key to killing bacteria is to use heat – so thorough cooking, all the way through, is important, especially with chicken where the meat texture is loose enough that bacteria can be found all the way through. This is as true of leftovers as it is for cooking the first time.

The Food Standards Agency recommend only reheating food once, but actually you can do it as many times as you like as long as you do it properly.

Firstly, store your leftover food well – that means keeping it as cool as possible in between servings. However, beware putting hot food straight into the fridge. All that does is raise the temperature inside your fridge and turn it into an incubator for bugs – not doing any of the food in there any good at all! Instead, cover it, and let it cool to room temperature (no more than 4 hours), and THEN put it straight into the fridge.

Secondly, reheat your food thoroughly. Most of us use a microwave oven to do that, but microwaves heat food unevenly, leaving cool pockets where bacteria can thrive. So, take the food out, stir it, and zap it again at least once more to make sure that you’ve got every part piping hot (above 60 degrees Celsius).

There is one exception to the ‘reheat it’ rule, and that is rice. There is a bacterium called Bacillus cereus that lives on rice in particular. The bacteria are just like any other food poisoning species – they can make you ill, but they are killed by heat. However, B. cereus also produce a compound that is toxic – and that toxin cannot be broken down by heating. So, once the bacteria have grown on your rice it will be poisonous however well you reheat it (and it will probably make you violently ill within 30-60 minutes).