Three stories about the power of resistance

In "The Digital Human: Resist" Aleks Krotoski explores how our digital tools can be reinvented in powerful ways by individuals seeking a better life.

From the smuggled USB stick to the Facebook protest page, here are three inspiring stories of how repurposed technology and, more recently, digital tools have helped the power of resistance.

Wanda’s story: The World War II radio in the wardrobe

Aleks Krotoski’s grandmother Wanda Gwozdziowski was born in Poland in 1926 - she was just 13 when the war broke out. Her father, an officer in the Polish Army, was taken prisoner of war, so she and her mother were left to fend for themselves during the Nazi occupation.

During this time, the Polish government was in exile in London and - with the help of the British government - were using the BBC’s radio transmissions to communicate with anyone in occupied Poland who still had a radio. They broadcast programmes in Polish three times a day that were loaded with encoded messages.

Wanda became a radio girl for the Underground Army; her codename “The Crow”. She remembers how her professor at school approached her: “He proposed to me if I want to work for the underground and I said of course. Then they brought a radio and they told me what to do.”

She recalls that, “The first things which I had to do were try to get the messages which were at the end of each programme from BBC. And there were usually numbers, letters – it was all in the code.” If, for example, weapons were due to be dropped in the forest somewhere, then “that would be sent as a message at the end of a programme.”

Wanda then had to pass the messages on to her contacts: “I was assigned two people… I would just knock on the door and either he or his wife would come and pick it up, and say thank you, and that was it. And it was exciting, it was exciting – every day was exciting.”

Interpreting the messages wasn’t easy. The Nazis knew that the radio girls were out there, so they broadcast interference over the BBC signal. Owning a radio was also dangerous. Wanda recalls how “there was a penalty of concentration camp for the radio.” Because of this, “when they brought the bigger radio, I had to put it in the wardrobe and take it out a few times a day to listen to the BBC.”

On one occasion, the Gestapo came knocking, looking for a family who were in the Underground Army. The first place they checked was the wardrobe. Thankfully, the radio had been moved: “This particular morning, my guardian angel told me to remove the radio from the wardrobe and I put it in the bed between the pillows and the covers.” When looking under the bed the Nazi soldier “put his hand next to the radio” and Wanda “froze”. But the radio wasn’t detected, the family escaped and she could continue her resistance efforts.

Could Marconi ever have imagined that his invention – created with the purpose of telegraph in mind – would be used in this way to help fight a war?

Nari is a defector from North Korea, now living in South Korea. She states, “Of course I watched a lot of foreign media. Yes, it had quite a strong influence on my decision to defect.” The technology she used to access this forbidden foreign media was the humble USB stick.

Alex explains how it works: “Imagine you live in a village, where every night there’s complete blackness and it’s because central government does not permit you to have electricity at night. So, in the morning, you head to the market and you encounter on the ground a USB stick, and you bring it home and you plug it into a portable DVD player. It may show you a library, it may show you a supermarket, it may show you a soap opera, where people are wearing clothing that is not destroyed and dirty, and where they’re eating food that’s not rotting. And this gives you hope. This is happening in every single North Korean village and town.” 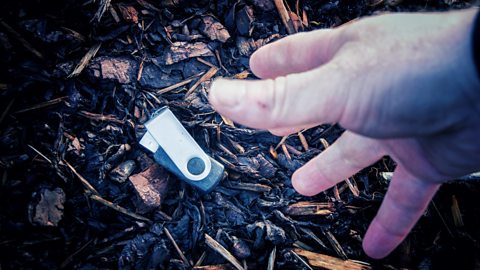 A spark of hope in the dark

Alex Gladstein explains how USBs get into North Korea - scattered under cover of night.

Nari explains how the way she accessed the outside information changed: “My friends and I passed USBs between us but the increased surveillance meant that it was no longer possible. After the crackdown I’d pay people with connections in China to get access to the new stuff. It wasn’t just USBs though. People in North Korea have mobile phones nowadays – smart phones too. They can use SD cards to store media and you can easily reformat videos so you can upload it to your phone.” She explains, “I think it’s like when someone tells you not to do something it makes you want to do it even more. People are really curious about the outside world, and especially about life in South Korea.”

Alex believes that, to people like Nari, the information being sent in to the Hermit Kingdom is like a “drop of water in the desert. You’re so thirsty for this outside information and you encounter it and it just gives you life.”

Masih’s story: Facebook and the photo of wind in her hair

Masoumeh "Masih" Alinejad-Ghomi is an Iranian journalist, now living in New York, who re-appropriated social media to start an online protest movement called "My Stealthy Freedom" - where women from Iran post photos of themselves without their headscarves.

She explains how the movement came about: “Let me be honest with you, I have too much hair and I was forced to wear the compulsory hijab from the age of seven.” Although she isn’t against the hijab, she hates to be forced to wear it: “I am all for freedom of choice.”

As a little girl, Masih would walk to school without wearing her scarf, only putting it back on at the very last minute: “That was the beginning, like having my freedom… when all those people who were forcing me to wear a hijab are not around, then I can feel the wind in my hair; I can be as free as my brother.”

Years later, on a trip to London, she took things a step (or leap) further: “I was just running in a street full of blossoms. I published that picture on my Facebook page and I wrote ‘every time when I run in a free country and I feel the wind in my hair it just reminds me of the time when my hair was like a hostage in the hands of the Iranian government.’” The post garnered a hugely positive response, as did the next photo she posted, taken when she was driving, unveiled: “I said ‘I strongly believe that there are a lot of women in Iran who have the same picture.’” She was bombarded by photos from women inside Iran.

Masih realised that these women wanted to talk about their freedom: “I created My Stealthy Freedom campaign, another page on Facebook, and I gave them a platform.” She describes is as a “mirror, to show them that they are not alone.”

Aleks explains how, “finding a hidden affordance within social media can profoundly affect someone’s sense of agency.” Masih believes that, “Iranian women do not want to be victims anymore. Iranian women do not want to be rescued… They want to bring change within the society and they are strong enough to be their own voices and the only thing that they need is just to be heard.”

The one thing that repurposed technology has given all of the individuals whose stories we’ve heard is hope. Listen now to Digital Human: Resist.

Explore the digital world on Radio 4