Watch Dogs: Legion preview - probably the only game where you can play as a roundhouse kicking granny

Ahead of its release on the 29th of October, I got the chance to play Ubisoft’s eagerly anticipated Watch Dogs: Legion. This third instalment in the Watch Dogs’ series enables the player to take control of the main character which is anyone and everyone within the game.

In fact, the most enjoyable thing about my time with the demo was the ability to play as any NPC. It’s easy to navigate, too. All you need to do is recruit any NPC to DedSec - a group of hacktivists hell-bent on freeing London from its tyrannical corporate ruler, Albion.

Once you find a character you’d like to recruit, you can start a short mission with them. That can be anything from investigating someone that your newly recruited character owes money to, collecting a supercar or simply heading down to the pub for a pint of roasting hot beer and some light assault charges. 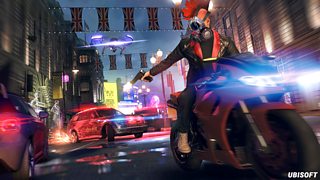 It’s a really impressive mechanic, but the apparent lack of handcrafted characters raises a few issues. One of the people I recruited was a middle-aged getaway driver with the patter of a mouthy teenager but the look of a Chelsea home-owning oligarch. I’m not sure if it was intentional or a result of lazy character development.

Another issue is the amount of pronoun-heavy dialogue. There are so many non-specific references to characters. Obviously the creators couldn’t record a line of dialogue with every single name in the game, but it’s noticeable that you’re rarely, if ever, referred to by name.

The moment-to-moment gameplay involving sneaking around, deciding how to hack various buildings and using your phone to make cars spin in circles is largely the same as Watch Dogs 2. However, this is no bad thing. I loved Watch Dogs 2 so expanding on that, with new tools and methods of infiltration, is great.

Each recruited character will also have unique traits. That can be access to certain buildings due to their status, a proficiency in hacking that rapidly opens doors and unlocks terminals or a proficiency in martial arts where kind, old women can roundhouse like Bruce Lee.

London is an excellent open world setting. Much like Watch Dogs 2’s San Francisco, the attention to detail is incredible. It manages to replicate the boroughs of the city, without forcing the player to commute for an hour between them. Even I, as someone who barely has a tourist’s knowledge of ‘The Big Smoke’, found myself roaming on recognisable streets.

The whole Britishness is a bit on the nose sometimes, I mean you can literally play a keepy ups mini-game, which I’m ashamed to say I spent far too long during my demo trying to perfect. It’s very much a postcard idea of London in some spots, but If they manage to capture the diversity of London in the way in which it deserves, I think it could be one of the most vibrant modern video game worlds.

Also in London is a big palace you might have heard of with a very famous resident, I’ll say no more, but for those looking to pick up the game, it’d be the first place I check out.

While the small section of the story I got to experience was certainly interesting, I can already see myself losing track of time hopping from recruit to recruit, experiencing their story. My main hope is that enough of them are unique enough to encourage that level of engagement. Especially when Watch Dogs 2 features some really rich characters and a story that I can still remember large chunks of, something you can’t typically say for SANDBOX GAME NUMBER 305 these days. If you’ve never played it because the first one was dire, you’re missing out.