Drones in the jungle 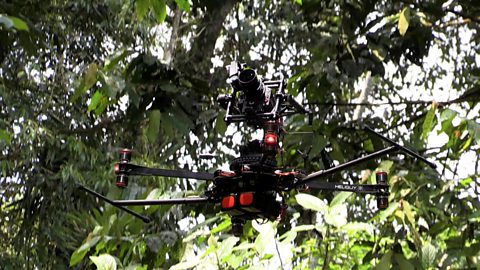 Web exclusive: Drone in the forest

The team uses a jungle-adapted drone to view the forest in a whole new way.

For Planet Earth II we wanted people to experience the jungle like never before, seeing the forest as the animals do.

Ninety percent of jungle animals live up in the tree top canopy, so we needed to film a hundred foot up in the trees – not an easy place to put a cameraman! But we can fly our cameras there…on drones!

Flying cinema quality cameras and lenses in the jungle isn’t easy. In fact, it had never been tried before. The systems don’t like rain and the environment is three dimensional, tangled, and dense. The same things that make it beautiful make it dangerous for a drone. Catching a thin vine or a drop of water falling from a leaf could cause the system to come down.

So we called in the experts! Drone pilot Guy Alexander and cameraman Ewan Donnachie have over 10 years of drone filming experience. They designed a special 'jungle-adapted’ drone that could take the heavy cameras and even carry them on top of the drone. Having the cameras on top instead of underneath meant they could get shots looking up and around at the canopy, rather than down at the forest floor.

Preflight checks were meticulous. The system and camera needed to be tested, then the headsets and monitors that allowed Ewan and Guy to co-ordinate their moves – one flying the drone and one steering the camera. Then each flight path had to be carefully checked with binoculars for twigs, leaves or narrow gaps.

In the jungles of Costa Rica we found some perfect spots. Tall trees with epiphytes, light gaps to fly the drone up and around and a few clear paths through the canopy. They got some shots that had never been done before and show the jungle the way a bird might see it... by flying the camera up into the sky!