Amazingly, it appears from internet forums that people have tried to use WD40 on their psoriasis – so could it work? 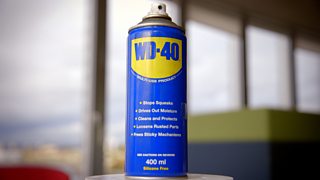 Psoriasis is an over-production of skin cells – the turnover is 20-30x that of normal skin so scales of skin accumulate. It’s a complex disease, and different people need different treatments.

The first option for most is emollients – skin creams. And that’s where WD40 comes in. Emollients are generally paraffin-based lubricants, and that is essentially what WD40 probably is.

However, the ingredients are actually a secret, so we can’t be sure what’s in it. Psoriasis, though, requires regular use of a skin cream, and WD40 specifically warns to avoid extensive contact with the skin.

In fact, all thin oils are absorbed too fast to be effective. Dermatologists advise starting with paraffin-based creams and gels that are designed for use on the skin. If these don’t work, then move on to creams containing coal tar, mild steroids, and vitamin D creams with a moisturiser.

Exposure to UV light can also dampen the immune system’s over-response, and specific therapy is available in which a test patch of skin is used to determine the right dose for your skin, and then a 6 week course is prescribed.

Finally, there are some specific drugs, such as vitamin-A based drugs, which can slow the turn-around of skin production, and most recently are biologic therapies which are just coming into use, targeted to individual patients.