A Canoe of Tongatapu by William Hodges, 1774 | © British Library Board

In the summer of 1768, an obscure sea captain called James Cook set sail from Plymouth on a ship called HMS Endeavour, bound for a newly discovered island in the Pacific Ocean called Tahiti.

His Pacific voyage changed the world, heralding a new age of globalisation.

Cook was a steady, unspectacular sailor, unknown outside the Royal Navy, and the Endeavour was an undistinguished vessel, built to ferry coal to London from Cook's native Whitby.

However his Pacific voyage changed the world, heralding a new age of globalisation, and now the British Library is marking this anniversary with a fascinating exhibition.

The official purpose of Cook's mission, commissioned by the Royal Society, was to track the passage of Venus as it passed before the Sun.

Its unofficial purpose, commissioned by the Admiralty, was to search for the so-called Great South Continent and claim it for the Crown.

Cook made two more voyages, in 1772 and 1776, ending with his death in 1780 when he was killed by rebellious natives in Hawaii.

By then he'd discovered countless Pacific islands and ventured into the Antarctic Circle, making Britain a global power and bringing Polynesia – for better or worse – into the western world. 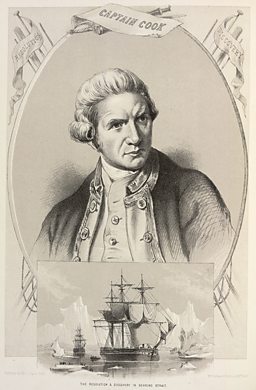 Before the invention of photography a ship's artist was indispensable to such an expedition.

This story has been told countless times, in countless exhibitions. What makes this show so special is the abundance of original records from Cook's three epic voyages.

Cook and several of his officers wrote comprehensive journals, and their (sometimes contradictory) accounts are vividly illustrated with a wealth of meticulous paintings and drawings. Before the invention of photography a ship's artist was indispensable to such an expedition.

These eye witness illustrations are full of atmosphere and detail, recording the first European sightings of Polynesian flora and fauna, topography and people. Of particular interest are the drawings by Tupaia, a native of Tahiti, who joined Cook's crew as they circumnavigated New Zealand. 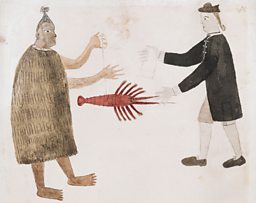 Banks and a Maori by Tupaia | © British Library Board

Tupaia was joined on Cook's first voyage by British artists Alexander Buchan and Sydney Parkinson. Buchan drew some exquisite studies of daily life on Tahiti, while Parkinson sketched the first European study of a kangaroo. Tragically, both men died of fever on the return voyage, and so did Tupaia.

Thankfully, Cook's other artists had a bit more luck. John Webber survived Cook's third voyage, painting some stunning portraits of indigenous peoples in Alaska. William Hodges, who captured the barren beauty of the Antarctic Circle, became a member of the Royal Academy.

What makes these pictures so absorbing is that they're not trying to be artistic – they're pure reportage. 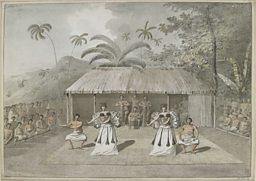 A Dance at Otaheite by John Webber, 1777 | © British Library Board 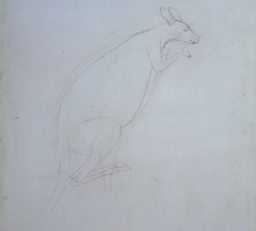 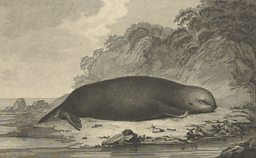 Sadly, there are few written records of what these indigenous people really thought of this invasion. As always, this was a history written mainly by and for the victors.

However these curators have done their utmost to stress that there is another side to this story which remains largely untold. In 1970, when white Australia celebrated the bicentenary of Cook's landing in Botany Bay, Aboriginal Australians laid wreaths in the water to commemorate his unnamed victims.

Cook's treatment of these native inhabitants remains a matter of fierce controversy. Indeed, it was even controversial at the time. Some of his shipmates thought him too harsh, some thought him too lenient. He seems to have tried his best to minimise the bloodshed, but he wasn't averse to flogging unruly natives, or even cutting off their ears.

Cook's contradictory attitudes reflected the conflicting attitudes of his age. Like the British philosopher John Locke, he believed in what Rudyard Kipling would later call "the White Man's Burden" – that patronising idea that it was Britain's duty to "civilise" these "primitive" societies. Yet his contact with these "pagan" peoples brought him closer to Jean-Jacques Rosseau, who championed the ideal of the "Noble Savage" as yet untainted by European civilisation.

Cook despaired of the corruption his sailors wrought (particularly the spread of venereal disease, which he strived to limit) but he had no qualms about colonising these virgin lands in the name of King George III.

This ambiguous approach was an echo of his orders. "Shedding the blood of those people is a crime of the highest order," warned the Royal Society. "No European nation has a right to occupy any part of their country or settle among them without their consent."

Yet the British idea of consent was a remarkably elastic concept. The Admiralty commanded Cook "to cultivate a friendship and alliance with them, making them presents of such trifles as they value". This wasn't fair exchange – this was robbery, plain and simple. Yet by the standards of his own time, Cook was comparatively benign, and his violent death secured his status as an imperial martyr. Entertainments at Lifuka on the reception of Captain Cook by John Webber, 1777 | © British Library Board 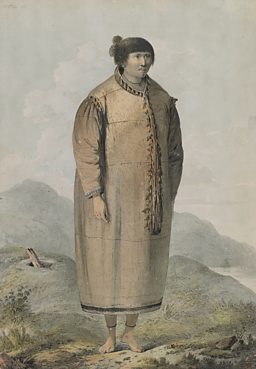 Portrait of a Woman of Unalaska by John Webber, 1778 | © British Library Board 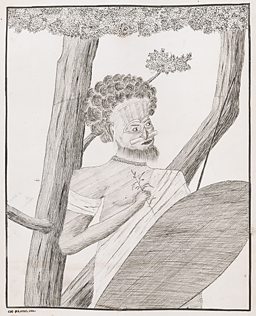 Drawing thought to show a man of the Guugu Yimithirr people by Charles Praval, 1770-71 | © British Library Board

Cook's crew mates brought a Polynesian called Omai back to Blighty (apparently of his own accord).

The first Polynesian to set foot in Britain, Omai became a celebrity, inspiring a popular pantomime called Omai – Or A Trip Around The World.

This panto depicted Cook as a humanitarian hero:

"He came and he saw – not to conquer but to save,
The Caesar of Britain was he,
Who scorned the ambition of making a slave,
While Britons themselves are so free."

Sadly, Omai's opinion of this assessment is not recorded. 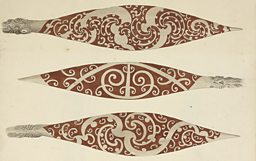 A View of the Endeavour's Watering Place in the Bay of Good Success by Alexander Buchan, 1769 | © British Library Board