What does caffeine really do to our brains?

Over six billion people worldwide regularly take caffeine. We’re told that it can keep us awake and boost our brain power but is there any truth in these claims, or are we all addicted to a drug that isn’t doing us any favours?Surgeon Gabriel Weston went to the University of Bristol to take part in a very revealing experiment with Prof Peter Rogers and Dr Emma Keenan.

Gabriel, herself a caffeine lover, joined a group of volunteers – 9 regular caffeine drinkers and 10 who never normally touch the stuff. After abstaining from caffeine for 12 hours they all underwent a series of tests to measure their mental agility, concentration and dexterity.

They were then given either a caffeinated drink or an identical looking placebo drink with no caffeine. The tests were then repeated to see how it affected them.

On the first tests, the caffeine drinkers performed worse than the non-caffeine drinkers. Their reaction times were slower, they were sleepier and less mentally alert. Without caffeine, they were suffering from caffeine withdrawal. It’s why many of us reach for caffeine first thing: we need it to get us going and bring us back up to our normal speed and normal focus. 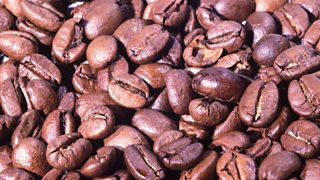 Then came the second batch of tests, after the volunteers had been given a drink either containing caffeine, or a placebo.

The placebo drink, with no caffeine, did not affect the volunteers’ results at all – although those that were caffeine addicts carried on getting worse at the tasks as they slumped deeper into withdrawal.

For those that got a caffeine fix, the results were different:

The volunteers who normally drink caffeine came out of withdrawal, but all it really did was bring their mental performance closer to normal levels, where the non-users had started.

For those who didn’t normally drink caffeine, the caffeine dose did make them feel slightly more alert but it also made several of them feel anxious and it made their hands shake.

The only measure that improved very slightly when people took caffeine was the speed at which they could press the space bar on a keyboard. It seems that caffeine may slightly boost the speed of physical movements – but it turns out that its effects on the brain are not what you might have thought.

All our results were in line with those found in a far larger experiment run by Prof Rogers and his team, so the conclusions are relatively secure.

This experiment has revealed the uncomfortable truth about caffeine. Although it can keep you from falling asleep, it doesn’t make your brain work any better, and you can very quickly become dependent on it, performing significantly below par unless you have your fix. Then there’s the significant side-effects of shaky hands and anxiety.

If caffeine isn’t the best way to give your brain a boost, what is?