Most of us wish sometimes that we were a bit more alert – that we could think a bit clearer or faster. Whether it’s an early start, mid-afternoon or a late night – what’s the best way to keep our brains at their best? 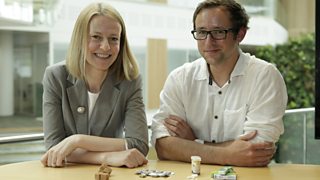 Surgeon Gabriel Weston and Dr Chris van Tulleken went to find out, with the help of Dr Andy Johnson from Bournemouth University.

The most common way we try to boost our alertness is by using caffeine. But, as our caffeine experiment revealed, it only keeps you awake – it doesn’t make you more mentally alert – and has significant side effects such as shaky hands. Not only that but you quickly become dependent on it.

We tested three possible alternatives which have reported to have brain-enhancing powers:

SugarSeveral scientific studies have shown that glucose can enhance cognitive performance. Our brains use glucose as fuel to produce energy and so there’s a theory that consuming glucose may provide extra energy for tasks which take a lot of brain processing.

SageThe medicinal uses of sage have been reported in different cultures for millennia: the Greeks considered garden sage as ‘good for helping diminution of senses and loss of memory’. Sage contains essential oils which work in the brain by blocking certain neurotransmitters. This is the mechanism by which some Alzheimer’s drugs work and so sage is being looked at as a potential treatment for Alzheimer’s.

Chewing gumIn recent years several studies have reported that chewing gum can improve attention, memory and even cognitive function. Chewing gum can lead to an increase in activity, and blood flow to, the medial and frontal lobes of the brain. These are the areas responsible for intelligence, language, memory and consciousness.

To put the three ‘caffeine alternatives’ to the test we recruited 24 office workers. For a week, all the volunteers had to complete two sets of tests every day - once between 10am and 11am and once after lunch to measure their alertness. The tests were:

For more information on the tasks, visit out Task Information page.

Before the afternoon test each volunteer took one of four substances, either:

To find out what was going on inside the volunteers’ brains we also measured the blood flow (using NIRS) in the brains of five of the volunteers every time they did the tasks.

Our volunteers, as expected, suffered from a worse performance on the tasks in the afternoon, compared with the morning. Neither the placebo pill nor the big sugar dose helped with this.

However, when it came to feeling more alert - measured by the questionnaires - the chewing gum did give them a significant improvement. The volunteers who tried the chewing gum also reported feeling more content. Our blood flow monitor results were in line with previous studies as well, showing some increase in blood flow to the frontal lobes. But, perhaps surprisingly, chewing gum didn’t change the performance of the alertness computer tests. So whilst it made the volunteers FEEL more alert, it didn’t actually MAKE them more alert.

However, we did see an effect on their attention tests when they took sage. In the afternoon, the volunteers who had taken sage pills got better at the task as they did it. This was very different from when they were taking the placebo pill, where there performance declined throughout the task.

If you want to feel mentally more alert, it might be time to ditch the caffeine and swap it for the sugar-free gum, and if you’ve got a tough task ahead of you, taking a dose of sage might just help your concentration.

A special thanks to Mr Jamie Goodliffe at the University of Bournemouth for producing the computerised tasks for this experiment.