Sniper at the Somme

Thomas McKinney was born in 1893 to a prosperous farming family in Carnmoney, County Antrim. His mother having died when he was young, Tom and his sister Elsie were raised by his father John, his aunt Meg and his grandfather, William McKinney.

One can get used to almost anything

Tom attended the Royal Belfast Academical Institution (RBAI or 'Inst'), before being sent to the Ballyhaise Agricultural College in Cavan in 1910 to prepare him for his future inheritance - the comfortable house and farm of Sentry Hill.

Brought up in a Presbyterian family, Tom signed the Ulster Covenant in September 1912 - a public declaration of opposition to the idea of Home Rule for Ireland. He did not, however, join the ranks of the Ulster Volunteer Force (UVF), a militia to which many other signatories pledged themselves. 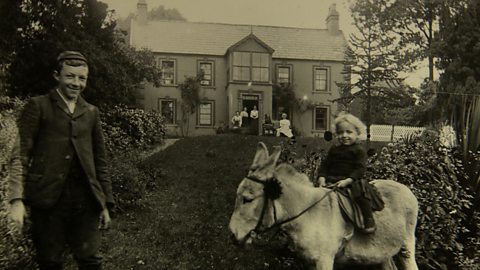 Agricultural life in Ireland was profoundly affected by World War One.

These pages are based on personal testimonies and contemporaneous accounts. They reflect how people saw things at that time and are not meant to be a definitive history of the period.

The words of Thomas McKinney

Biographical information is taken from Sentry Hill and the Great War - Tom's Story, with kind permission of its author Philip Orr.