The Magician’s Apprentice: The Fact File

The read-through for The Magician’s Apprentice took place on Monday, 9 February and shooting on it began later that same week, on Thursday 12 February. 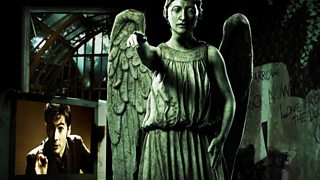 ‘The beginning… where it all started…’ The Magician’s Apprentice premiered on 19 September, 2015. Exactly 52 years earlier the first filming session for the very first Doctor Who adventure, An Unearthly Child, took place in Ealing Studios!

Director Hettie Macdonald was at the helm for Blink back in 2007, the award-winning episode that introduced the Weeping Angels to the world.

Kelly Hunter returned as the Shadow Architect, previously seen in the Tenth Doctor episode, The Stolen Earth. And Clare Higgins is back as Ohila! Fans may remember her from The Night of the Doctor in 2013 and more recently, the Series 9 Prologue. Other familiar faces include Michelle Gomez and Jemma Redgrave, of course, playing Missy and Kate, respectively. 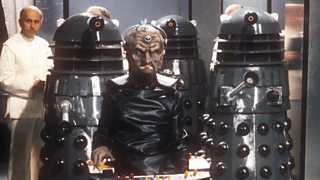 Michael Wisher as Davros in 1975's Genesis of the Daleks

The exterior scenes on Skaro featuring Missy and Clara were shot in Tenerife, the largest of the Canary Islands. The crew had previously filmed on Lanzarote, another of the islands, for several of Kill the Moon’s lunar sequences and way back in 1984 that same island was utilised on a location shoot for Planet of Fire.

The fact we see one soldier armed with a bow and arrow has a degree of irony. When the Fourth Doctor visited the war on Skaro during Genesis of the Daleks, his companion, Harry, was astonished by the weaponry used by the military in the fighting and reflected, ‘they're going to finish off with bows and arrows...’

Clara mentions the English novelist, Jane Austen, during her lesson… The last time she was referenced, Clara was also at Coal Hill School and on that occasion the Doctor corrected her regarding the year which Austen’s best known work, Pride and Prejudice, was written. 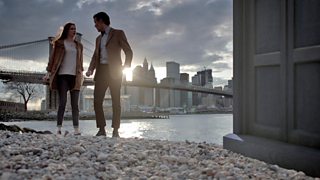 When Jac mentions ‘San Martino, Troy (and) multiples for New York…’ it’s a reference to several previous adventures. The Doctor and Sarah visited San Martino in The Masque of Mandragora and the TARDIS landed in the Big Apple in The Chase, Daleks in Manhattan/Evolution of the Daleks and The Angels Take Manhattan.

Jac’s allusion to ‘three possible versions of Atlantis’ is a knowing nod to a trio of early stories. Atlantis was apparently destroyed when Missy – known at the time as the Master – unleashed the chronovore, Kronos, in The Time Monster but we also saw a version of Atlantis in the Second Doctor story, The Underwater Menace. Finally, in The Daemons, the mighty Azal spoke of Atlantis but suggested he had caused its demise… Hence Jac referring to ‘three possible versions’!

‘Compassion, Doctor. It has always been your greatest indulgence…’ Davros’ words echo those spoken by his creations in Victory of the Daleks: ‘The Doctor has failed! His compassion is his greatest weakness! Daleks have no such weakness!’

When Clara says, ‘Do not go gentle into that good night…’ she’s quoting the first line of Dylan Thomas’ poem of the same title. You can enjoy the poem performed in its entirety here.