Can plastic water bottles cause cancer?

There always seem to be claims going around about harmful chemicals in the plastic packaging used for some food and drink. For instance, there is an infamous email circulating saying that leaving plastic water bottles in the sun can cause chemicals to leach into the water causing cancer, and sometimes even cites a university research paper – like many others this is a hoax. 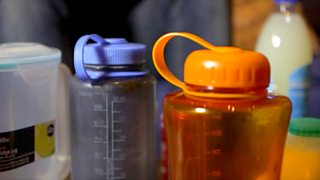 However, there have been some genuine scientific concerns about a chemical called bisphenol A, or BPA.

BPA is found in a huge range of things from polycarbonate containers and the linings of cans of food to the heat-sensitive paper used in receipts and tickets. There have been claims that BPA can cause harm by acting like a female hormone, and it has been linked to, although not proven to be a cause of a range of health issues. But is there evidence that this chemical can be harmful?

Studies have shown that at very high concentrations BPA can be harmful to mice, particularly pregnant or very young mice. But humans metabolise chemicals like BPA very differently. At present there is no strong, conclusive evidence that at the everyday concentrations we may be exposed to, BPA can cause harm.

BPA has been used in packaging for years and it’s estimated that it can be detected in the urine of most adults in the developed world. However, it is possible to reduce your exposure by avoiding BPA in plastic packaging. Most plastics are labelled with a number which allows you to work out whether it contains BPA. The number is inside the triangular recycling mark.

In the EU, plastics used for baby bottles and toys must be BPA free.

However, the plastic linings of cans of food, and the common heat-sensitive receipt paper still contain BPA so it’s almost impossible to avoid it entirely in daily life.