Being Human is a BBC Three series about three housemates who happen to be a werewolf, vampire and a ghost, and their quest to come to terms with who they are.

﻿Read below to find out what happened in the previous series, or click the related links to read the episode outlines. 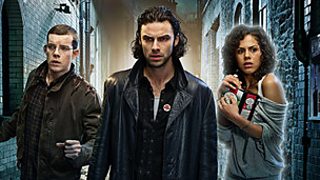 Have you ever heard the one about a werewolf, a vampire and a ghost living together? Well for George, Mitchell and Annie, that's no joke; that's their life... or afterlife as the case may be. The supernatural trio share a rented house, desperately trying to balance their paranormal problems with the challenge of simply Being Human.

The threat to Mitchell, George and Annie is human in the form of the mysterious Professor Jaggat and the cold-hearted Kemp. Jaggat and Kemp are fundamentalist Christians who discovered the existence of vampires, werewolves and ghosts and determined to destroy them or carry out brutal experiments upon them.

Our supernatural heroes move to Wales to continue their quest to live like normal human beings. But with the net closing in on Mitchell, Annie trapped in purgatory and George and Nina battling domestic challenges, it’s going to be more difficult than ever.

In an old B&B in a sleepy seaside town, we join Annie (Lenora Crichlow), her housemate George (Russell Tovey) and their new friend Tom (Michael Socha). They're reeling from the loss of their best friend Mitchell, Tom's father-figure McNair and the tragic death of George's girlfriend, Nina.

But with a newborn baby to look after, it's never been more difficult to live life under-the-radar as a ghost and two werewolves. There are also the vampires to deal with: lurking in every corner of society, waiting for the Old Ones to arrive and take over the world with brutal force.

Series five of Being Human is the biggest and boldest yet. We join Hal, Tom and Alex as they continue their search for their lost humanity, but once again a threat lurks around every corner. There is the volatile and deluded Crumb – a newly recruited vampire, and the sinister Mr Rook – head of a secret government department tasked with keeping supernatural activity under wraps.

With bills to be paid, our heroes take jobs in Barry’s kitschest hotel. But alongside the flock wallpaper and the cocktail umbrellas dwells an evil greater than anything Hal, Tom and Alex have faced before. On the face of it, Captain Hatch is just another foul-mouthed decrepit old man but he hides a dark secret that threatens not only our heroes’ friendships but the entire world.