In episode six of Civilisations, First Contact, David Olusoga examines how travel and trade brought together cultures that had been isolated from each other. Sometimes the wealth and status of nations was communicated via the exchange of wild animals, like rhinos and cheetahs.

Today royal pets are more synonymous with domesticated corgis than wild animals, but historically monarchs would own an array of exotic creatures, often given by foreign royalty or powerful figures as lavish gifts to acknowledge wealth or status. A collection of animals on display – known as a menagerie – was significant because it demonstrated a country’s geographical reach.

These ostentatious menageries existed before images of exotic animals were widespread across Europe, so for many people the arrival of these unusual creatures was the first time they had ever seen a giraffe or an elephant. The novelty of the animals inspired numerous artworks, either commissioned by their proud owners or in response to the commotion following their arrival.

The practice of gifting animals to royalty continues today, though the animals often remain in their native countries, or are re-homed in animal sanctuaries or zoos. During her reign Queen Elizabeth II has received many animals, including a Jersey cow, a sloth, a crocodile, two American beavers, six red kangaroos and three black geldings from the Royal Canadian Mounted Police, named James, George and Sir John.

An elephant for Pope Leo X

It was once traditional for Christian rulers to send gifts to a new pope following his election. When Pope Leo X was elected in 1513, King Manuel I of Portugal sent a white elephant as a gift.

Portugal had previously gifted popes parrots, mandrills, leopards and a troop of monkeys but Annone (who became known as Hanno) was the first elephant to come to Italy for centuries. He fast became a must-see attraction for the entire country.

On his first meeting with the Pope, Hanno is said to have bowed low before trumpeting three times and then spraying the assembled spectators with water.

The Pope housed Hanno in a special building on the Courtile de Belvedere and allowed the people of Rome to visit him at weekends. When Hanno died he was buried under the Vatican courtyard where he had lived, where he remains to this day.

After his death the Pope had the famous Italian artist Raphael paint a life-sized fresco of the animal on the wall of the Vatican’s gatehouse. The original is lost but a copy exists, credited to one of Raphael’s students, at the Kupferstichkabinett (Museum of Prints and Drawings) in Berlin. 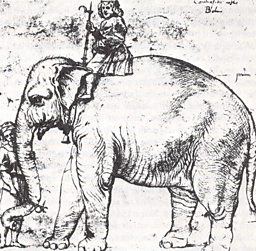 The Elephant Hanno, after Raphael, 1516

A rhino for King Manuel I of Portugal

During the 16th Century, at the height of Portugal’s global trading empire, an Indian prince sent a live rhinoceros to King Manuel I of Portugal. It was brought on a 120-day sea voyage from Africa and paraded around the docks of Lisbon - the first rhino seen in Europe since the Romans.

When it arrived in Lisbon the Belém Tower was under construction and the city’s new resident inspired a series of gargoyles shaped as rhinos.

The animal was also immortalised by the German painter and printmaker Albrecht Dürer. Despite never seeing it in person, he was able to use a rough sketch and a written description to produce a woodcut print that sold thousands of copies.

The rhino didn’t reside in the city for long. King Manuel I wanted to pass the exotic gift on, sending it by ship to Pope Leo X as he had previously done with the white elephant. Unfortunately the boat carrying the animal to Rome was shipwrecked off the coast of Italy during the journey. 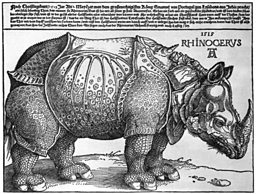 A cheetah for King George III

In 1764 Sir George Pigot, a senior colonial administrator in India, sent a cheetah, also known as a she tyger, to Britain in an attempt to win favour with King George III.

Miss Jenny, as the cheetah was known, was taken back to England by an Indian trader who took the name John Morgan. George III wasn't overly enamoured with the gift and didn’t want to keep the animal, and passed her onto his cousin the Duke of Cumberland, who had a menagerie in Windsor Great Park. It was later moved to the king’s menagerie at the Tower of London.

British artist George Stubbs painted an incident that occurred shortly after Miss Jenny arrived at Windsor Great Park. The Duke put on a mock hunt and hoped the cheetah would chase a stag – but the Indian animal was actually too frightened to give chase.

The giraffes that Mohammed sent to the monarchs of Britain and France were probably half-siblings, captured as calves in the Nubian Desert in around 1826.

King George's was delivered to Britain in a ship, allegedly with a hole cut out to accommodate her long neck. The giraffe was housed in the menagerie at the Royal Lodge in Windsor Great Park until her death in 1829.

Her sister enjoyed a longer life, living in the Jardin des Plantes for 18 years. Later named Zafara the giraffe travelled on foot from Marseille to Paris, drawing gigantic crowds. In Paris, over 100,000 people came to see her, approximately an eighth of the population of Paris at the time, and with her arrival came a craze for giraffe memorabilia and fashion. She is now displayed at the natural history museum in La Rochelle.

The giraffe sent to Vienna caused a similar stir: a Giraffe Ball was held shortly after her arrival with keeper Hagi Ali Sciobari as the guest of honour. Two Austrian composers created new works for the occasion, Giraffen-Rondeau by Wenzel Plachy and a Giraffengalopp by Henri Herz. 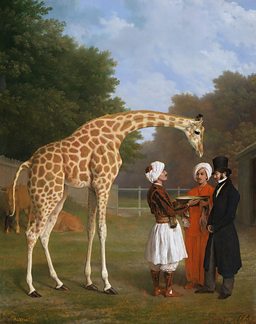