Queen Lear and The Archers: an Everyday Story of Shakespearean Folk

We love The Archers! - an everyday story of country folk, set and recorded in the Midlands (not far from ‘Shakespeare Country’) telling universal stories through family and farming drama…

Like Soap, Shakespeare’s works were written to be enjoyed by the masses. The Archers reaches nearly 5 million people every week across the airwaves, offering on ongoing everyday drama about families and community, and reflecting wider British culture...

As a special treat, we've collaborated with The Archers to bring you Queen Lear - aka Peggy Woolley (with huge thanks to June Spencer). 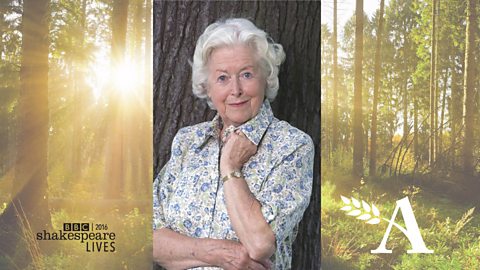 Peggy Woolley as you've never heard her before!

In a memorable scene from 2014, Peggy gathered her family close as she explained her plans for her will. Peggy's only son, Tony, was shocked to be left out of things - it appeared that Peggy didn't feel the future of the family business was safe in Tony's hands, so he was bypassed for his son Tom.

Well, now that we've got that out of the way... anyone for a cup of tea? Or a fondant fancy?

Of course, today things are very different. Faced with the prospect of losing her son after an horrific bull attack, Peggy sat by Tony’s bedside as he lay critical in hospital and opened up about how much she loved him, admitting that she had been overcritical, and deeply regretted leaving Tony out of her will. Coupled with this, trusted grandson Tom had had a major meltdown at the aisle, jilting his fiance Kirsty, fleeing the country to find himself, and suddenly wasn't looking like the golden boy and saviour of the farm he'd been built up to be.

But all came good in time - and unlike in King Lear, Peggy managed to avoid tragedy (and a descent into madness) before realising the error of her ways...

Peggy's will: listen to the original clip from 2014

Here is the actual moment Peggy gathered her family close to reveal her plans - from 19 January 2014. Peggy's purpose was twofold - she told them that her deceased and wealthy husband Jack had left the bulk of his estate to his daughter Hazel. Peggy received The Lodge and enough to live on... 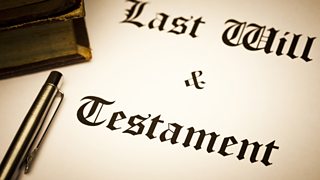 Revisit this memorable moment on The Archer Blog

Shakespeare and The Archers: Family Drama...

Kings and heirs: Lear meets Henry IV: in 2008 Brian came to an agreement with Adam and Debbie - Home Farm was effectively in their hands, for them to make decisions and run it as they saw fit. However if they were to do anything detrimental to the long-term fertility of the land, or some other error, there was a clause in the contracts: Brian's illegitimate son, Ruairi, would have his own interests protected - he'd still inherit a third share of the farm... 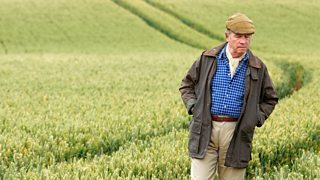 Another moment of high drama came when Debbie, Brian's daughter, confronted him over an affair he was having (with Siobhan Hathaway, who gave birth to Brian's son Ruairi). The incriminating evidence: one of Brian's monogrammed handkerchiefs found with Siobhan.

Unlike poor, accused Desdemona in Othello, Brian was very much guilty as charged...

The Handkerchief in Othello - and manipulative Iago

I am glad I have found this napkin.
This was her first remembrance from the Moor.
My wayward husband hath a hundred times
Wooed me to steal it. But she so loves the token
(For he conjured her she should ever keep it)
That she reserves it evermore about her
To kiss and talk to. I'll have the work ta'en out
And give 't Iago. What he will do with it
Heaven knows, not I.
I nothing but to please his fantasy. (3.3.334-343)

Writing The Archers: what I've learned from Shakespeare - by Caroline Harrington

creating in our listeners' heads not the "vasty fields of France", but the rolling hills of Borsetshire

The pictures are better on radio, so goes the old saying. But as with most things, Shakespeare got there first. In the prologue to Henry V he exhorts his audience to let his words "on your imaginary forces work", to conjure up the soldiers and horses at Agincourt. And that's what writing for The Archers involves - creating in our listeners' heads not the "vasty fields of France", but the rolling hills of Borsetshire.

I used to be an actor, and I learned to write good dialogue by having to speak unspeakable lines, and thinking that I could do better. (I've been in a few terrible plays in my time.) But I've also done my fair share of Shakespeare (favourite role, Beatrice in Much Ado), and now, when I'm not writing The Archers, I help run a theatre company, Shakespeare at the Tobacco Factory. It was started seventeen years ago, on a shoestring, and now, as well as our three-month season in Bristol, we tour around Britain and Europe. So most of what I know about scriptwriting, I've learned from Shakespeare.

Jim Lloyd ... is just as much of a pedant as Polonius (think of all those Latin epigrams)

There's a rhythm to dialogue. Of course we don't write in iambic pentameters (although I've written a fair few rhyming couplets for Ambridge pantos). But the rhythm of speech is what defines a character. Hamlet can't translate his thought into action - so he ends up endlessly talking to himself all the time ("To be or not to be..." etc). Polonius can't resist telling his son, at considerable length, how to live his life. Jim Lloyd used to do a lot of that, and is just as much of a pedant as Polonius (think of all those Latin epigrams).

Lynda Snell too can be splendidly verbose when the need arises ("...village customs that I have spent half a lifetime nurturing, encouraging, conserving, trampled into the ground in the name of brash innovation...").

Every character has their own rhythm, and you can hear it when their speech doesn't ring true, like a bum note in music

Whereas someone like Neil Carter is tentative, his speech slow and thoughtful, interspersed with lots of ums and ers. Unlike his aspirational wife, Susan, who can never resist blowing her own trumpet ("... my many years of experience in retail management..."). Every character has their own rhythm, and you can hear it when their speech doesn't ring true, like a bum note in music.

It has always been the priority of Shakespeare at the Tobacco Factory that our audience will understand every word. Well... almost every word. Ulysses in Troilus and Cressida has the famous line, "Time hath, my lord, a wallet at his back/ wherein the puts alms for oblivion..." Beautiful, resonant - but what does it actually mean?

There are some lines in The Archers like that. "Pip's been out with the plate meter, measuring the next three paddocks in the rotation." Not as poetic, I grant you, but to many listeners, I'm sure, equally incomprehensible. But that's how farmers speak, and using their language (courtesy of our Agricultural Story Editor) is what creates the reality of rural life in Borsetshire, just as Shakespeare's language conjures up the Grecian camp in Troilus and Cressida, or the "the very casques / That did affright the air at Agincourt".

Rob Titchener is Iago (from Othello)

Clever, manipulative, charming: subtly dropping poison by innocently dispensing gossip into the right ears, enough to do damage and sit back and watch the carnage unfold. He had people hanging on his every word - butter wouldn’t melt… 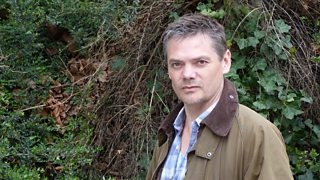 In this clip, Rob chose his moment on New Year's Eve to whisper into Ian’s ear, innocently revealing that Adam (Ian's partner) has not exactly been totally faithful to Ian...

Germaine Greer on Shakespeare and Soap - at Hay Festival 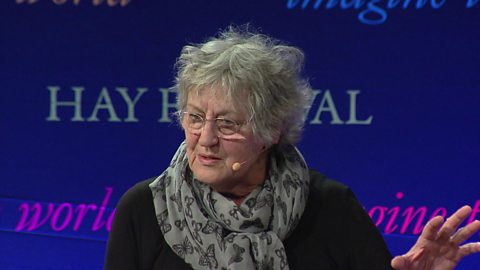 What Shakespeare and today's soap opera writers have in common

Germaine Greer questions how famous the bard was as a playwright in his lifetime. 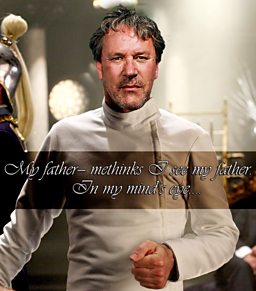 "Methinks I see my Father"... David Archer as Hamlet

Ghostly apparitions: a unique moment in The Archers' history

We all remember it well: David Archer was in personal turmoil as he tried to do the right thing for the family and his marriage: stay put at Brookfield or sell up and effectively abandon the local community?

I should have had the courage to go with what was always right...
Phil Archer

In his heart David knew that he couldn't leave Ambridge. In a memorable, groundbreaking moment in The Archers' history, David heard his father's reassuring voice in his ear - a treat for fans who missed and fondly remembered the late actor Norman Painting...

Poor milkman and pigman Jazzer's long suffering, unrequited love for barmaid Fallon has been the subject of speculation for years. 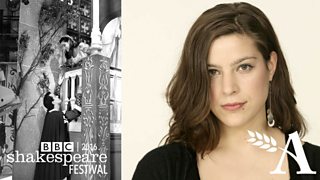 One New Year's Eve, Jazzer (drunk) could no longer hide his feelings. Just like Romeo appearing at Juliet's balcony, Jazzer woke Fallon up in the wee small hours to tell her something (which he'd regret in the morning)... 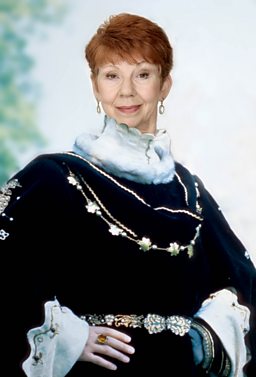 Lynda (Peter Quince) Snell - and the Play within a Play device...

No feature about The Archers and Shakespeare would be complete without a tribute to Ambridge's indomitable director and dramaturg, Lynda Snell! 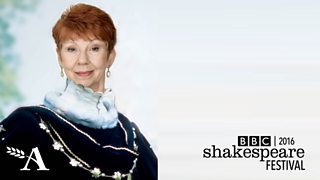 Like the leader of the Rude Mechanicals in A Midsummer Night's Dream, Lynda somehow year on year manages to put a community theatrical production together. Her cast? A rag bag of unsuitable, mismatched, under-confident, but ultimately hard working and eager to please locals. It somehow always manages to come together!

The play-within-a-play device is used in several of Shakespeare's plays, such as Hamlet and A Midsummer Night's Dream. And just like in The Archers, it's the perfect way to expose the main plot of the drama and characters' flaws, motivations and relationships. Long may Lynda's efforts continue!

In 2012, Lynda staged a night of Elizabethan Christmas Revels – with Kenton going off-script as self styled Lord of Misrule...

Kenton Archer - aka the Lord of Misrule 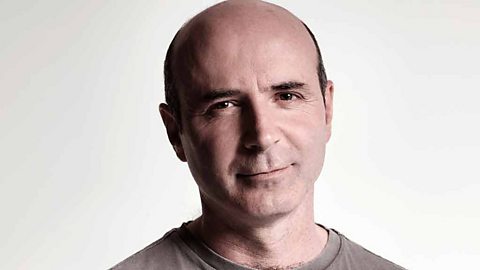 Speaking of a good Puck...

Here's a different take on Lynda Snell - and several others - courtesy of Shambridge.

In this Shakespearean tribute to The Archers, Lynda is frantically searching for her Bottom, as she hopes to cast her perfect production of A Midsummer Night's Dream. But of course she runs into difficulty trying to persuade the locals to take part...

Shambridge does Shakespeare and The Archers: Lynda's Perfect Bottom 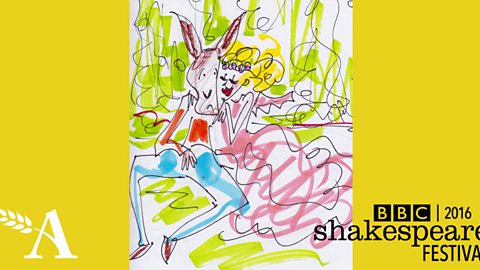 Much Ado about Ambridge - blogging The Archers and its Shakespeare connection

It seems unlikely that Pip has an unknown sister who can provide a partner for either Rex or Toby, or that there is easily-undone magic at work, so we will not see- to use Puck’s words- two neat ‘Jack shall have Jill’ couplings here. The conclusion is hard to predict, as both The Archers and Shakespeare have precedents in love triangles where the ending is unhappy...

Read the whole article from Much Ado about Ambridge.

Pip and The Fairbrothers - A Midsummer Night's Love Triangle?

In 1989 a normally silent Pru Forrest was given a voice when Judi Dench joined the cast for a memorable cameo - all to celebrate The Archers’ 10,000th episode. Dench was joined by the late Terry Wogan, who arrived at Grey Gables Hotel where he was playing in a charity golf tournament. The usually silent Pru planned to give Terry a welcoming speech but despite some nudging from Jack Woolley she dried up on the spot.

But as Terry settled into his room, he got a surprise visit from Pru who presented him with her welcoming gift of some damson cheese. She asked Terry to look at her speech for the festival that he was kindly attending. After a misunderstanding about when to speak, Pru interrupted Terry as he addressed the crowd. She was so embarrassed that she vowed never to speak in public again! (seems Pru was true to her word) 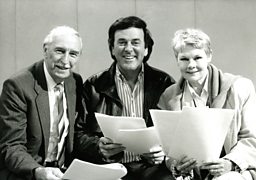 Arnold Peters (as Jack Woolley), Terry Wogan (as himself) and Judi Dench as Pru Forrest - The Archers, 1989