Smoke and Mirrors: Spiritualism in World War One

The archetypal mystic with hooped earrings, the fairground fortune-teller, the eccentric Madame Arcati in Blithe Spirit….mediums are known as a mainstay of classic films but genuine interest in the Spiritualist movement hit its peak during the First World War.

The fifth season of the WW1 drama Home Front explores the unearthly appetite for spiritualism through the characters of Clemmie Crayford, a medium who only accepts voluntary donations, and Madame Aethyria, the theatrical nom-de-plume of Dolly Clout who has claimed to see ghosts in past episodes.

Inspired to learn more about WW1 spiritualism, we ‘tuned-in’ to this fascinating world…

145 societies were affiliated to the Spiritualists National Union in 1914, but by 1919 it had grown to 309. Authorities used the antiquated Witchcraft and Vagrancy Acts to target mediums. It wasn’t fully legalised until 1951.

It isn’t hard to see what would have attracted people to spiritualism at a time of such crisis. The spectre of death loomed large in wartime Britain. For those unable to reconcile themselves to the loss, Spiritualism had a dual purpose; to reunite them with their departed loved ones with ‘evidence’ that they were in a better place, and as a secondary result, reassure themselves that their own afterlife would be an escape from their own hard lives, a promise of better things to come.

Rituals around death were still closely observed at this time. In Lincolnshire, widows would have their photographs taken behind their late husband’s chair, which would remain empty ever afterwards. This actually continued up until the 1950s. In Northamptonshire, the back door of the deceased’s home was left open during the funeral and someone remained in the house so that the spirit was able to leave and join the funeral. In an environment in which a belief in the afterlife was so commonplace, it is easy to see how Spiritualism could take hold.

Burgeoning technology also played a major role. The advent of ‘radio’, and the vital role newly-developed telegraphy played in linking people together during the war, gave people a way of understanding Spiritualism. The term ‘tuning in’ was used to describe a medium making contact with the spirit world and people would talk about the channels and wavelengths of the ‘other side’. Rapid advances in wireless communications led to experiments in ‘psychic telegraphs’, which inventor David Wilson claimed could pick up ‘auras’ in the ether. 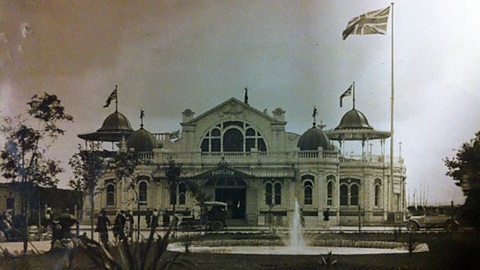 Sherlock creator ventured into the mystery of spiritualism

Spiritualism also enjoyed a form of celebrity endorsement, with Sherlock Holmes author Arthur Conan Doyle, Fleet Street journalist Hannen Swaffer who became editor of the Psychic News and scientist Sir Oliver Lodge being prominent advocates. Lodge’s book Raymond became a seminal spiritualist work charting his efforts to contact his dead soldier son with the famous medium Gladys Leonard and her Indian spirit guide Feda. This is echoed in Season 5 of Home Front which coincides with Raymond’s death, and features character Gabriel Graham attempts to contact his own deceased son via his new telephone.

Listen to one of the very few recordings of Gladys Leonard as “Feda”.

The spirits were also believed to be comforting ‘our brave boys’. Arthur Machen’s short story “The Bowmen”, about spirits from Agincourt protecting British troops during the retreat at Mons, was published in September 1914. The ‘Angels of Mons’ legend rapidly became viewed as a first hand factual account, despite Machen’s denials. Stories of ‘angelic’ dead colleagues returning to save their fellow soldiers, and other types of celestial intervention were keenly reported in the newspapers.

It is this that tells us most about why Spiritualism flourished; for families desperate for news of their loved ones, living daily with the risk of death and losing faith in their leaders, the prospect of some superpower, an otherworldly influence, was reassuring. In the chaos of war, amid the frailty of humanity, to feel that the outcome was no longer in mortal hands was a kind of relinquishing of control that brought a strange sort of peace.

Listen to Season 5 of Home Front 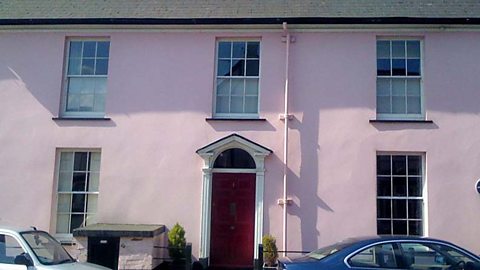 33 The Square, Caerleon: Birthplace of Arthur Machen - creator of one of the greatest WW1 Myths

First ever Urban Myth, The Angel of Mons, was invented during WW1