Planet Puffin is a new podcast where you can head to Scotland’s Isle of May to follow the fortunes of a puffin colony across this year’s breeding season. How do Puffins know where home is? What do they eat? And where do they go in winter?

Here are some of our favourite Puffin facts.

1. Puffins lose their looks in the winter

Atlantic puffins’ beaks are more reminiscent of birds that live in the rainforest than on chilly cliffs. Bright orange or red, with blue and white streaks, it’s obvious why they’ve been dubbed the “clowns of the sea” when you see the beak offset against the white, make-up-like saucers that surround their sorrowful eyes.

Much like clowns removing their make-up at the end of a show, puffins shed their characteristic looks when the mating season finishes. Gone are the colourful beak and the black mascara-like markings around the eyes which give them their sorrowful definition.

In winter puffins also moult away their wing feathers, rendering them flightless. They look so different and are so rarely seen in winter that in the past any scientists who did see them tended to mistake them for a completely different species.

2. They fly under water

When wintering out at sea puffins dive as deep as 60m. They swim by flapping their wings as if flying through the water and use their feet to steer. There, they hunt herring, hake, capelin, and sand eels, topping up their meals by drinking the salt water. Puffin parents can supply their young with fish more than 100 times a day.

If you thought the puffins couldn’t get any more impressive, in January 2018, Nottingham University student Jamie Dunning posted a picture on Twitter which revealed that puffin beaks glow under UV light.

The internet went into overdrive and everyone wanted to know the story behind this rave-ready adaptation. Does a glowing beak help a puffin attract a mate? Can they see this perceived photo-luminescence? Is it simply an accidental by-product of the beak re-growing in the summer? Dunning and a team of scientists from around the globe are now deep in detective work to try to understand just why puffins are even cooler than we thought.

Puffins usually carry around 10 fish at a time in their beaks.

4. There’s something fishy about that moustache

Take a quick trawl of puffin pictures online and you can guarantee one of the first pictures you’ll see is of a grand-looking Atlantic Puffin standing with a bounty of fish dangling from either side of its mouth like some sort of silver, dapper moustache.

One puffin once carried 126 fish in their beak!

Given how much we hear about fish stocks being in decline, can they really have swooped into the water and snatched up half a shoal in their mouth? Sadly for the puffins, they have to work a bit harder than that, and it’s down to the design of their beaks that they can take home these mouthfuls.

Rather than working like a pair of scissors which have less grip the further the fish is held from the joint, puffin jaws are more manoeuvrable and can grip fish front to back with equal pressure. When swimming underwater with fish in their mouths you’d think they’d lose the fish they had already caught if they opened their beak, but that isn’t the case. Inside the beak are what are known as ‘denticles’ which are spines that face towards the throat. Puffins use their tongue to push fish against the denticles while they carry on hunting for more fish.

Puffins usually carry around 10 fish at a time but Dr Ellie Owen from the RSPB told Planet Puffin that the most fish she’s ever heard of a puffin carrying is 126!

When puffins return from a winter at sea they find their way to the exact burrow where they’ve raised their chicks year after year, and reunite with the mate that they usually stay with for life. Considering puffins live for around 20 years, that's a considerable commitment.

Like a long hug on a train station platform as a long-distance couple meet again, puffin partners bump beaks and peck each other on the cheek in a courtship display known as “billing”.

Billing can be flirtatious, and some puffins will bump beaks with a bird on the side – but when it comes to breeding, puffins are dedicated. They begin around the age of five, and from then on each year the couple rest all their hopes on a single egg. Once it’s laid, both parents take turns to care for their young and the “divorce rate” of birds that split up is just 7 per cent.

6. There’s room underground for an en-suite

Puffins raise their chicks – known as pufflings – in burrows below ground or between rocks on steep cliffs. It’s a smart tactic to keep predators from stealing the egg but it’s hard graft. They use their bills to cut into soil and then, like dogs, they use their legs to fling the soil into the air behind them as they dig. Inside, there’s a nest of feathers and grass where they incubate the egg. Then they dig out a bend and build a bathroom for the young chick to do its business so it doesn’t soil its feathers. As the chick grows older, the parents move the toilet closer to the entrance of the burrow entrance to help keep its feathers clean so that when the day comes to leave the nest the chick can swim off into the sea.

7. A plethora of puffins

When most of us in the UK imagine a puffin, we think of the Atlantic Puffin, but there are actually several species, each with their own quirky and majestic looks. Our Atlantic puffin is the smallest and looks fairly similar to the Horned Puffin, which breeds along the Alaska-British Columbia border. The easiest way to tell the two apart is by their beaks. The Atlantic Puffin’s beak is orangey-red with a blue or grey triangle and white stripes, while the Horned Puffin’s beak is mostly a yellowy-ivory colour with an orange tip. 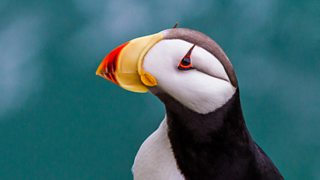 The easiest way to tell puffins apart is by their beaks. The Atlantic Puffin’s beak is orangey-red with a blue or grey triangle and white stripes, while the Horned Puffin’s beak is mostly a yellowy-ivory colour with an orange tip.

The Tufted Puffin swaps the often forlorn, sad look of the Atlantic Puffin for a disgruntled, wizened look. Its eyes aren’t ringed with black, and its plumage is less white on its face, so it is a darker bird with a shock of bold, yellow feathers down its neck.

Puffins are a lot smaller than most people think. Atlantic Puffins are the smallest of the puffin family at about 10 inches tall, and they weigh around 500 grams.

9. Smelling their way through the seas

How birds like puffins navigate over such huge distances has long been a mystery, but recent studies suggest that birds could create a map in their minds using smell.

Researchers from the universities of Oxford, Barcelona and Pisa temporarily took away a seabird’s sense of smell and found that birds could manage small trips to catch food and return to land but when it came to migration their route was uncharacteristically disorientated. So it seems smell could be the secret to finding their way when they are unable to navigate by sight.

10. Puffins present a picture of a changing world

Seabirds such as puffins indicate what’s happening beneath the surface of the world’s waters. Climate change has been linked to changing sea temperatures which, coupled with pressures from fisheries, is having a significant impact on distribution and size of fish. In Britain, it’s thought that the decline in puffin numbers in recent years, especially on the eastern coast of Scotland, is linked to food shortages in the North Sea. Some colony declines are linked to lack of food availability to breeding birds but it is conditions in the wintering areas that are now believed to be most critical for long-term health of puffin populations.

11. Puffballs and pastors – how the puffin got its name

The word puffin is thought to come from, quite simply, the word “puff” and when you see a swollen-looking puffling it’s easy to see why. They have a fluffy ball of dense down feathers adapted to keep them warm while their parents are off fishing.

The scientific name is less literal, though. Fratercula arctica was coined in the late 1800s and means "little brother of the north" in Latin. It’s said to be because the black and white feathers look like the robes of a religious friar. Taking this even further, some say that when puffins take off to fly they hold their feet together in such a way it looks like hands clasped together in prayer.

12: They are not the most efficient birds

Puffins are often said to be fab flyers because they can flap their wings up to 400 times a minute and speed through the air at up to 88km an hour. But, such vigorous flapping is inefficient and means puffins need a lot of food to keep them fuelled when they’re travelling long distances through the air. They also have trouble landing, often crashing into the water or rolling onto the grass, tumbling into any other puffins that may be in their way

13. It can be dangerous being a puffin

Their main predators are hungry gulls, which can snatch puffins mid-flight or swoop down and scoop their prey from the ground.

But there are other dangers, the Atlantic Puffin found in the UK has recently been classified as endangered by the International Union for the Conservation of Nature. The main threats are sea temperature rises, overfishing, which can lead to a shortage of food for puffins, and pollution – particularly oil spills. Spills make them sick and destroys their waterproof feathers, essential for their survival.