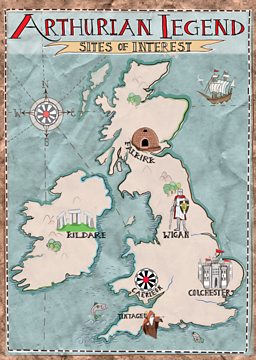 Stories about King Arthur pop up across the UK and Ireland – from remote corners to busy towns. Here's a snapshot:

Caerleon:
The still-visible Roman amphitheatre at Caerleon has associations with Arthur's Round Table and has been named as one of a number of possible locations of Camelot. The Hanbury Arms in Caerleon was visited by Tennyson who lodged there when he wrote Idylls of the King.

Colchester:
It’s thought that the name Camelot may have referred to the capital of Roman Britain Camulodunum - now Colchester.

Mount Killaraus:
Mount Killaraus is a legendary mountain in Ireland, where Merlin was said to have removed a giant’s ring. He took it to Salisbury Plain where it became Stonehenge. Some say that Mount Killaraus was located around Kildare.

Falkirk:
Arthur’s O'on was a celebrated ancient monument in Scotland, which stood from the Early Middle Ages until the 18th century. The stone mound stood on the north bank of the River Carron. Some say it's the original site of Arthur’s Round Table.

Tintagel:
Made famous by Tennyson’s Idylls of the King. Merlin’s cave can be found in Tintagel. It's said to be haunted by the ghost of the wizard.

Wigan:
One of Arthur's battles is thought to have taken place here, on the banks of the River Douglas. The town has also been cited as a possible location of Arthur's court.