Seven Sacred Wonders of the World

Some of the best-known landmarks in the world have been inspired by faith and today they attract more visitors than ever before. For some they are places of quiet contemplation, for others they are sites of astonishing acts of worship, dangerous challenges and extraordinary deeds of devotion.

Watch the first episode of BBC One’s Sacred Wonders on Wednesday 7th August at 9pm or catch up on iPlayer.

Angkor is a vast complex of over 70 temples, the remains of an ancient city that is once thought to have covered a wider area than modern-day Paris.

At its heart is the biggest temple of all: Angkor Wat, built in the 12th century to honour the Hindu god Vishnu. Its 5 towers, reaching up to 60 metres high, represent the mountain peaks believed to be the home of the gods.

With its surrounding grounds, Angkor Wat is considered to be the largest religious monument in the world. Angkor is now a site of Buddhist worship, but some Cambodians also believe that the temples are home to their ancestral spirits. 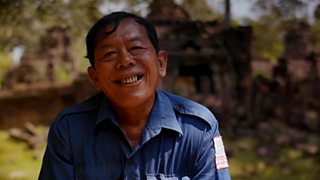 Loun Lorng is one of the gardeners fighting a constant battle to stop the surrounding jungle from engulfing and destroying the temples, often risking their lives in the process.

The Great Mosque of Djenné, Mali

The Great Mosque of Djenné is the largest mud building in the world. In places its walls are two feet thick. To protect it from the baking African sun and the erosion when the rains come, a new covering of mud is required every year.

Mud pits are dug in the local riverbed three weeks ahead of the re-plastering. When the mud is ready, the whole town pitches in to help cover the mosque from top to bottom.

It’s believed that those who help build or repair a mosque will have an easier path to paradise. 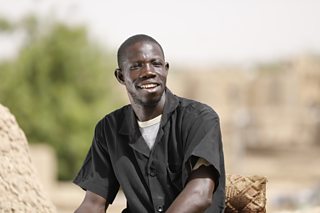 Baber Djennepo is one of the masons responsible for the annual re-plastering of the Great Mosque.

For Sikhs the most sacred site in the world is the Golden Temple in Amritsar. First built over 400 years ago out of brick, it was destroyed and later rebuilt using marble and gold leaf.

The body of water surrounding it is known as the Pool of Nectar, and Sikhs bathe in its waters when they pray. A key principle of Sikhism is equality among all people, and the temple has entrances on four sides to symbolise that all are welcome, wherever they are from. Every visitor to the Golden Temple, whatever their race or religion, is invited to the Temple’s communal kitchen to eat a free meal.

On busy festival days, the kitchen feeds up to a quarter of a million guests a day, with all the food provided by donations and cooked by volunteers. 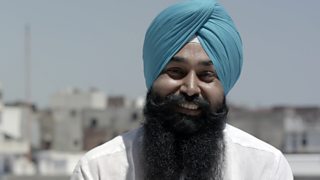 Tajinder Singh is one of the volunteers who will make and serve food to the thousands of worshippers during the festival of Vaisakhi.

The 133 metre high Nachi waterfall is the tallest unbroken cascade in Japan. It is considered sacred by both of the main faiths in Japan, Shinto and Buddhism. In the Shinto faith, the waterfall is believed to be one of the most powerful Kami, or deities, in all Japan.

A complex of shrines has been built on the nearby mountainside, where several other Kami considered important to the wellbeing of Japan are thought to reside. It is believed that for Japan to have a prosperous and harmonious year, these Kami must be re-energised by an annual visit to Nachi falls.

Shinto devotees undertake a gruelling ceremony to purify the route the Kami will take down the mountainside. They must run up and down the steep stone staircases with giant flaming torches, each weighing 50 kilograms. 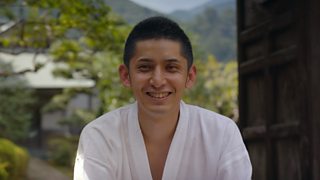 Chikara Murai is one of the 12 torch-bearers taking part in the ceremony and weighs just 10kg more than the torch he carries. 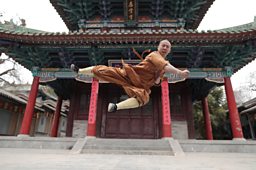 The Shaolin Temple’s history spans over 1,500 years. Founded in the 5th century, the monastery was built on the slopes of sacred Mt. Song in central China.

It is popular with tourists who come to see the ornately painted Thousand Buddha Hall and the tombs of Buddhist masters in the Pagoda forest. But since the 1970’s, the Temple has become most famous for its warrior monks who practice Kung Fu.

The temple is home to 400 monks, including 100 warrior monks. To become a fully ordained monk at the temple takes many years of dedication. As well as being an important centre of martial arts, it is also a sacred place of Buddhist study. 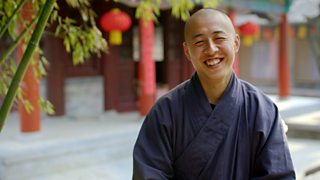 Shi Yandian is a student monk at the temple hoping to qualify as a full warrior monk.

Rising up from the Judean desert, Masada is an ancient fortress built by King Herod over 2,000 years ago. It is home to the remains of one of the oldest synagogues on earth.

Many believe that the fort that once stood here is where Jewish rebels made their last stand against Roman invaders in the 1st Century. Roman soldiers later laid siege to the site, building a ramp and battering ram to break through the fortified walls. Instead of surrendering, it’s believed the rebels decided to take their own lives rather than give up their faith and freedom.

Masada is so symbolic that many Jewish families choose to have their sons and daughters Bar and Bat Mitzvah ceremony in the ancient synagogue. 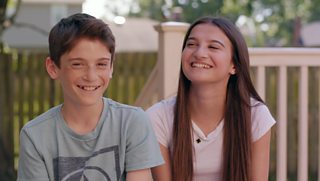 Jacob and Mia have traveled thousands of miles with their family for the ceremony.

The Church of the Holy Sepulchre, Jerusalem

The Church of the Holy Sepulchre is one of Christianity’s most sacred sites. It is believed to have been built on the spot where Jesus was crucified, buried and resurrected.

A shrine now covers the empty tomb at the centre of the Church, surrounded by different chapels from the Catholic and Orthodox Churches. Destroyed and rebuilt many times since the 4th Century, pilgrims flock from all over the world to visit the Church to take part in daily services.

Many Orthodox Christians believe that a miracle has taken place here every Easter Saturday for the past 1,200 years. Witnessed only by the patriarch of the Greek Orthodox Church, it is said the Holy Spirit creates a sacred flame within Christ’s tomb. The patriarch passes the flame to the crowds of eager faithful waiting outside the shrine. Hanna and Yousef Kosho are two torch-bearers for the Syriac Orthodox Church, who will carry the flame from the shrine to their Bishop waiting in the Syriac Chapel.