The funniest comedies inspired by history

Greg Jenner knows a bit about history. Not only is he a historian but as a comedy writer he has written about the past for Horrible Histories. For Hilarious Histories: What’s So Funny About The Past? Greg takes a look at some of the best historical comedy and asks what it is that makes the past so hilarious...

As an MA student in Medieval Studies, my thesis proposal deviated wildly from the norm. Everyone else was writing about Chaucer and churches – proper medieval stuff – but I wanted to write about Monty Python’s very silly film The Holy Grail. As a lifelong comedy nerd, I was fascinated with why did the Pythons keep making history jokes? What was it about the past that proved so funny?

I suppose it’s no surprise they kept doing historical gags, because two of them were history buffs. Terry Jones even went on to become a proper medieval historian. But there was more to it than just personal taste. Holy Grail, Life of Brian and Flying Circus all mined humour from the contrast between then and now. They set up historical scenarios where you expect certain things, only to burst the balloon with the chaotic arrival of modernity in all its shouty glory. We can’t help but laugh at the subversive chaos of the 20th century trampling over the past. Also, they wore funny hats. What’s not to love?

Maid Marian and her Merry Men

One of my favourite shows as a kid was Tony Robinson’s sitcom Maid Marian and Her Merry Men. It was witty and warm, while being surreal and slightly anarchic. It blended narrative plotting with musical parodies (I still sing “it’s pancake day, it’s pancake day, it’s p-p-p-p-p-p-p-p pancake day!” every year on Shrove Tuesday”). Also its casting was surprisingly progressive; it had a clever, kickass, female lead and a cool black guy with dreads – two things you wouldn’t expect of the medieval world. I loved it, and I’m pretty sure it’s the reason I became a medievalist. When I look at my job on Horrible Histories, where our diverse cast entertains kids with surreal sketches and silly songs, I hear a lot of echoes from my own childhood favourite.

There really are no rules to historical comedy; it’s simply a question of what makes you laugh. Why is this? Well, unlike Horrible Histories, most comedy writers aren’t trying to teach us anything. They’re just using history as an amusing adventure playground. But the question I always want to ask them is whether they’ve chosen their period simply because it’s just funny or because it’s important too? 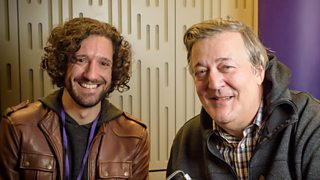 Stephen Fry makes some fascinating observations about why Blackadder changed its historical setting for every series – going from medieval to Elizabethan to Regency to WW1. He notes how the tragedy of the trenches affected the show’s creative process, with there being much more focus on historical specificity in Blackadder Goes Forth. For all the brilliant gags, the most memorable moment in all four series is that heartbreaking finale where our beloved characters are mowed down by machine-gun fire.