Is apple cider vinegar really good for me?

Vinegars have been extolled since ancient times for their health properties, but at the moment, it is apple cider vinegar in particular that is claimed to be a cure-all for everything from acne to arthritis. However, the European Food Safety Authority has yet to endorse any of the claims made in the history books or online. So what is the truth about apple cider vinegar? 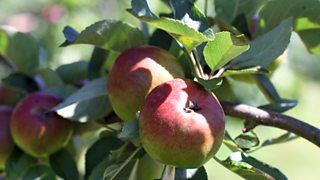 To find out, we teamed up with metabolism researcher Dr James Brown, from Aston University, to carry out some experiments.

There have been some experiments on vinegar that have looked at the possibility of it helping control blood sugar levels immediately after eating starchy food.

Vinegars are made when bacteria feed on alcohol turning it into acetic acid. In the laboratory, acetic acid has been shown to interfere with one of the enzymes that helps break starch down to glucose and studies have shown that adding vinegar to a starchy meal such as white bread can reduce the blood sugar spike that people get after eating it.

We wanted to try this experiment in healthy volunteers, and so tested apple cider vinegar against malt vinegar – both of which contained similar amounts of acetic acid (5% acetic acid).

Day 1
Our seven volunteers arrived for the experiment having fasted overnight for at least 12 hours. They then each ate two bagels, containing 44g starch each. We measured their blood sugar levels using a finger-prick test before they ate and then every 30 minutes afterwards, for 90 minutes.

Day 2
The same volunteers returned the following day, again having fasted overnight, and each ate another two bagels. This time, though, they drank a dilute solution of apple cider vinegar (30ml of organic apple cider vinegar diluted to 200ml with water) before eating. Again we measured their blood sugar levels before eating and every 30 minutes afterwards for 90 minutes.

Day 1
Six volunteers arrived for the experiment having fasted overnight for at least 12 hours. They then each ate two bagels, containing 44g starch. We measured their blood sugar levels using a finger-prick test before they ate and then every 30 minutes afterwards, for 90 minutes.

Day2
The same six volunteers returned, again having fasted overnight, and each ate another two bagels. This time, though, these volunteers drank a dilute solution of malt vinegar (30ml of malt vinegar diluted to 200ml with water) before eating. Again we measured their blood sugar levels before eating and every 30 minutes afterwards for 90 minutes.

Whilst our apple cider vinegar group witnessed a 36% reduction in the overall sugar intake into the blood after a meal over the 90 minutes testing period, there was no significant change in the malt vinegar group.

This was a little surprising since past studies had shown a similar effect in malt vinegar. However the small sample size of our malt vinegar group may have been the reason.

Short term results are one thing, but does drinking apple cider vinegar hold any sustained health benefit? Many claims are related to its powers to help us lose weight, reduce the risk of type 2 diabetes, reduce inflammation in conditions like arthritis – and even improve our skin and hair. If it were reducing the spike of blood sugar that we get from eating starchy foods then in the longer term that could have benefits for improving blood sugar control, which is at the root of type 2 diabetes.

So, to put some of the claims around apple cider vinegar to the test, we designed a second experiment.

We recruited 27 volunteers, and divided them into three groups:

Group 2 did exactly the same, but with malt vinegar

Group 3 did the same again, but with a control solution of coloured water

Before they started the experiment, and after they finished, we assessed their:-

We found no significant weight loss in any group.

There was no significant reduction in the inflammation markers of any group.

There was no improvement in any group’s glucose tolerance or change in glycated haemoglobin.

Total cholesterol only reduced by 13 per cent in the apple cider vinegar group, but not significantly in any others. (ANOVA post hoc test and linear two stage step up, p<0.05 when corrected by the two step process for multiple comparisons). Changes in LDL and HDL, or in triglycerides themselves were not statistically significant.

In our study, we saw a significant drop in total cholesterol in the blood in just eight weeks. The experiment volunteers did not have unhealthily high cholesterol, and so it’s possible that in people with cholesterol problems, an even greater effect could have been seen. High total cholesterol is associated with a higher risk of heart disease and stroke.

The lack of change in inflammation markers may be because vinegar does not affect inflammation or this marker, or may be down to variability or small sample size.

The fact that the short-term effect seen on blood sugar levels after a meal did not translate into a longer-term improvement in blood sugar control are interesting, and perhaps illustrates the problems with assuming long terms benefits from fairly marginal short term effects. Or perhaps this was, again, down to the small sample size.

That malt vinegar didn’t have any effect on cholesterol suggests that whatever benefit the apple cider vinegar had was down to something particular to the apple component. It could be that one of the many biochemicals found in apples, or a combination of these, has a cholesterol-lowering effect.

What do the experts recommend?

Taking apple cider vinegar sparingly in your diet, particularly around meal times could have a beneficial effect on your cholesterol levels. However “sparingly” is the key word here – drinking lots of acidic vinegar is not advised as it can be harmful for your food pipe.

Instead, either put it on your food in small quantities, or drink it very diluted. There are other ways to reduce cholesterol that have fewer risks of side effects!