How can I get rid of belly fat?

Whether it’s a round beer belly or a jiggly spare tyre – you either love it or you wish you could get rid of it. 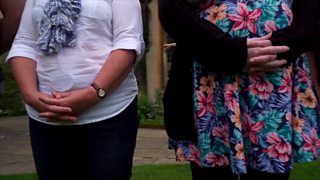 The problem is that belly fat isn’t just the ‘inch you can pinch’ (known as subcutaneous fat), it is also what is in your abdomen and surrounding your internal organs – this fat is known as visceral fat. If you have too much fat you can grab that probably means you have too much internal visceral fat too, and that is much more dangerous.

Visceral fat is thought to be more metabolically active than subcutaneous fat. It produces hormones and chemicals that can cause harm and affect how our organs function. This puts us at greater risk of diabetes or heart disease. Anything we can do to reduce this belly fat can only do us good.

So is there an answer – and is it diet or exercise?

We are bombarded online by a variety of techniques which claim to be able to target problem areas such as a belly using quick fixes. The question is can we really target fat within our bodies doing something known as ‘spot reducing’ by exercise or diet?

We gathered a group of 35 volunteers at Oxford to take part in our experiment over 6 weeks. They all had unhealthy waistlines and excess belly fat which they were hoping to lose.

Our groups all had to come and have a DXA scan which told us the amount of fat which was in their bodies as well as lean tissue, blood pressure, circulating fat (triglycerides) in the blood, fasting blood sugar as well as weight measures.

We then assigned our 35 volunteers into 4 separate groups:

Group 1: Diet Group – controlling their food portions, under the guidance of Frederik’s team

Group 2: Activity group – increasing their physical activity, under the guidance of Dylan’s team

Group 4: The Abdominal Crunches Group – doing a regime of sit-ups (one of the most popular ‘spot reduction’ techniques put forward for belly fat)

Our Diet group lost the most amount of weight – on average they lost 3.7kg of weight each over the 6 weeks – a total of 35kg between them. The total body fat that was lost it was about 5%. But interestingly if we look at the results of visceral fat there was in fact a reduction of about 14% each! This group also reduced their cholesterol and blood pressure, and measured a 5cm reduction in their waistlines!

The diet group showed 3 times greater fat loss in from the visceral fat compared with the rest of body fat. This clearly shows that visceral fat is preferentially lost with a short term effective dietary restriction.

⅔ of the lost weight in the Diet group was fat mass but ⅓ was lean mass (both statistically significant). This means that as well as losing fat, the diet group lost muscle, which isn’t such good news especially because as we age we lose muscle mass – it can make us prone to more falls later in life. So combining dieting with some resistance exercise to retain muscle would be ideal (see Can I get stronger without going to the gym? for some ways to do this easily at home).

The Activity group who increased their overall activity lost less weight – a modest amount of around 1kg per person – but there were no changes in the dangerous visceral fat in their bellies.

However, their systolic blood pressure fell by 18 mmHg or around 12%, and the unhealthy fat in their blood (triglycerides) fell by a huge 25% (-0.36 mmol/l). Their waistline shrank by a modest 2cm. The change in waist was similar to the change in weight - close to being statistically significant.

There was a small, but interesting and statistically significant effect on lean (muscle) mass in the Milk group: Despite an extra 400kCal of milk per day, there was no change in overall body weight, but there was tendency towards increasing lean mass (statistically significant). Low fat milk contains quite a lot of protein, so the extra protein may have helped them put on more muscle. If the diet group had added milk to their diets, perhaps this would have helped them avoid losing muscle.

Protein also fills you up. Despite taking in about 15% extra calories in the milk, they didn’t put on weight, which could mean that they were eating less other food.

The abdominal crunches group didn't see any improvements in blood pressure or triglycerides. However, their waistlines did shrink by just over 2cm (2.25 cm) on average. Because there was no change in fat around the waist we know that this was almost certainly due to just an improvement in muscle tone. They were essentially ‘holding their fat in’ with muscle! Not a big health benefit – but it might help them look better!

The diet group were the clear winners in our experiment, but our results also highlight the importance of managing what you eat to lose weight as well as exercising to avoid muscle loss and maintain overall health and fitness. Thinking about how active you are is important and remember it isn’t just about going to the gym, you can increase your activity just by thinking about what you already do and doing more of it – take the stairs instead of the lift and opt to walk when possible. You could also try adding milk to your diet to stave off muscle loss! It certainly won’t make you put on more weight or affect your blood fats – at least by our results.

When it comes to getting a flatter tummy just working your belly muscles won’t really do anything for you other than give you extra muscle to hold in that flab!

The fad diets and exercise regimes out there just aren’t needed when it really can be just as simple as getting more activity in to our daily lives and controlling the portion sizes of our food – end of story (and no need to click on all those internet links now – we’ve done it for you, and put their regimes to the test!)