Suffragetto: How a board game helped women win the vote

Drawing on the creative skills of its membership, the Women's Social and Political Union (WSPU) created a board game of strategy to raise money for its ongoing struggle to win the right to vote for women in the early 20th Century. Suffragetto is an intriguing example from a new exhibition about the women who dared to do the unexpected.

It’s the latest craze! Or at least it was in 1908. Suffragetto is a board game of battles, a tabletop clash of Suffragettes versus the Police.

The aim of the campaign is for the Suffragettes (in green) to take the House of Commons while protecting their base in the Albert Hall, and for the Police (in black) to do the reverse. The winner is the first side to get six pieces into the opposing faction's building. Exploring the tactics of the activists fighting for the vote, the game reflects the struggle of women who dared to do the unexpected in pursuit of their goal.

Making and selling the game employed some lateral thinking and was a novel way of raising funds for the Women’s Social and Political Union. The WSPU realised that they couldn't always rely on large donations from wealthy individuals, but that regular sales of journals and money raised from entertainments could keep the organisation going in times of need.

The game features in the Bodleian Libraries exhibition Sappho to Suffrage: Women Who Dared, which showcases treasures from the libraries which celebrates the achievement of women across a range of disciplines, spanning millennia.

Originally manufactured by Sargeant Bros Ltd, circa 1908/9, the Bodleian holds the only known surviving copy - but the game recently received a digital update from author Tony Wolf, who created a free online version which expands on the original. 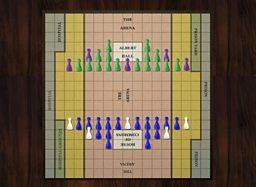 The Sappho to Suffrage: Women Who Dared exhibition is at the Bodleian Libraries, Treasury Weston Library until 3 February 2019. Admission is free. International Women's Day is celebrated on Wednesday 8 March 2018. 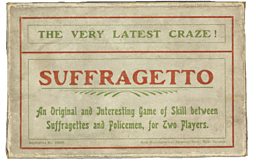 In the Sappho to Suffrage exhibition, curator Professor Senia Paseta explores the extraordinary life of women pirates and poets, suffragettes and scientists.

For Prof Paseta, some figures stand out more than others. She says: "I have admired Mary Wollstonecraft’s clear-headed vision and extraordinary intellect for many years and had her at the top of my list for inclusion." A copy of Wollstonecraft’s A Vindication of the Rights of Woman, from 1792, is included in the exhibition.

Other inspirations on display have more of a personal resonance for the curator, including the prayer book of a Benedictine nun from Zadar (in modern day Croatia). She says: "My parents live there and I know the area where the book would have been read very well. Being introduced to that was a happy surprise."

As a co-director of Women in the Humanities, and history tutor at St Hugh’s College, Oxford, Prof Paseta has a particular interest in women’s history and political activism.

So looking on with an historian's eye, does she think in 100 years people will look back on the current rise in visible activism as a global turning point? "I really hope so. As a historian I know that change can be painfully slow, but that change can happen. But I’m also aware that changes can be reversed so we have to be vigilant."

She adds: "We are seeing women who dare, a real ground swell of mass activism, just as we did in this country more than 100 years ago."