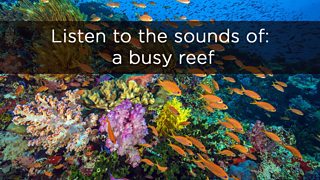 Natural sound is an important part of any wildlife doc. It helps create atmosphere and a sense of place. But for the Blue Planet II sound team, the challenges of portraying natural underwater soundscapes are many.

Contrary to Cousteau’s notion of ‘the silent world’, the oceans are alive with sound. Much of it is the natural sounds of fish, mammals and smaller creatures going about their business. That can sound wonderful - if you’re in the vicinity of a singing humpback whale - but on a busy coral reef city, the busy sounds can produce a busy background noise of grunts, bumps and clicks that isn’t always that pleasant to listen to.

Sound travels far and fast underwater – and that includes the noise of human activity. When we looked into recording sound at the bottom of the Mariana Trench for example, scientists told us that sound pollution from ship traffic can even reach all the way down there.

The most important component of the soundtrack is the natural sounds available – those that the cameras and professional sound recordists have captured. The Blue Planet II team have gone to great lengths to take recordings from all sorts of sea creatures and have worked with scientists to reveal the dawn chorus of fish on a coral reef, for example. If you can tune into the right frequency, some fish, it turns out, sing. There’s a sequence about this with Dr Steve Simpson in the final episode. 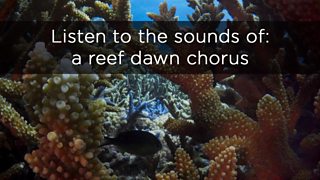 We don’t play the relentless soundtrack of the cameraman breathing - that would be like watching TV whilst sitting next to Darth Vader. So to create an immersive and enjoyable experience, underwater filmmakers have no choice but to re-create a suitable soundscape in post-production, once the film has been edited.

My favourite sequence for its soundtrack is when we dive with a sperm whale mother, who is communicating with her baby, before using her sonar to hunt. The sound was recorded on the on-board suction-cup camera that had been placed on her back. It’s the first time we’ve heard the full sound-cycle of a diving sperm whale. 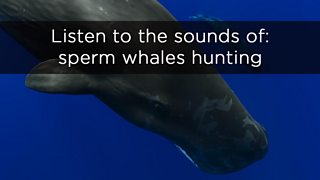 In tracklay, other sounds are added: a woosh of a passing jellyfish, or the rocketing explosion of methane from the Deep Sea bed. This helps convey the experience of ‘being there’ that is important for an immersive TV experience.

Natural sound recordings, the sound effects, the narrator’s commentary and music must all be mixed to make the film’s final soundtrack. The challenge of the sound mixer’s craft is to be true to nature, whilst also creating an informative and entertaining film. And crucially, a pleasant viewing experience for the audience. And in mixing all the sound layers, the sound mixer must also create a 3D soundscape, for surround sound viewing. And because sound travels much faster in water than in air, there are potentially a much larger number sources of natural sound that could be heard at any given moment, so a final flourish of ‘artistic license’ is required to focus the viewer on the story.

Given sea creatures hear and use sound over a wide range of frequencies, from the infra-sound of blue whales, to the ultra-sound of pistol shrimp, all sea life only tunes into part of the spectrum of sound available. In creating a soundtrack suitable for the human viewing experience, we too are doing much the same thing as in nature itself, tuning into the noises that make the most sense of our world.