10 incredible facts about the sloth

Unjustly defamed by their association with a deadly sin, sloths have shaken off their bad press to become one of the world's most beloved tree-hugging mammals. In Natural Histories: Sloth, Brett Westwood and Joanna Pinnock discuss our relationship with this languid treetop dweller throughout the centuries.

We've enlisted Dr Rebecca Cliffe, leading wildlife researcher and founder of the Sloth Conservation Foundation, to give us 10 incredible facts about this fascinating creature.

1. Without sloths there would be no avocados

The extinct giant ground sloths were some of the only mammals that had digestive systems large enough to process the huge avocado seeds whole. They feasted on the fruit and then dispersed the seeds far and wide. All tree sloths that we see today evolved from giant ground sloths — there were thought to be over 80 different types with the largest (Megatherium) reaching over six metres in height. There is even evidence to suggest that several different species of marine sloth existed, feeding from sea grass and seaweed in shallow water. 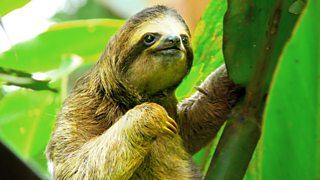 2. Sloths are three times stronger than us

Sloths are the undisputed pull-up world champions — from the moment they are born sloths are able to lift their entire body weight upwards with just one arm. Not only that, but sloths have 30% less muscle mass than similar sized mammals and are over three times stronger than the average human. They have a highly specialised muscle arrangement that can produce enough strength to withstand the force of a jaguar trying to rip them from the tree. Specialised tendons in the sloth’s hands and feet lock into place, allowing them to hang upside down for long periods of time without wasting any energy. This unique locking mechanism is also how sloths are able to sleep while hanging from a tree branch, and they have even been known to remain suspended upside down after death!

3. They poo a third of their body weight in one go

On average, a sloth will fall out of a tree once a week for its entire life.

Sloths are famous for their bizarre bathroom habits — they will only relieve themselves once a week and can lose up to a third of their body weight in one sitting! Furthermore, they will only do it on the ground after wiggling around the base of a tree to dig a little hole. This weird weekly routine remains one of the biggest mysteries surrounding sloth behaviour. While there are many different theories, the likely explanation is that it’s all about communication and reproduction.

They have a very rare condition called rod monochromacy which means that they completely lack cone cells in their eyes. As a result all sloths are colour-blind, can only see poorly in dim light and are completely blind in bright daylight. Thankfully, sloths compensate for such poor vision by having a phenomenal sense of smell and a great spatial memory! Their bad eyesight also plays a key role in the sloths slowness ⁠— you can’t run around in the trees if you can’t see where you are going! 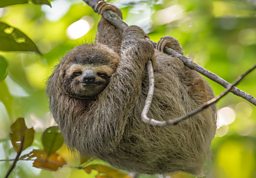 5. They are faster in water than on land

Although they spend most of their time in the trees, sloths are surprisingly good swimmers — they can swim through water three times faster than they can move on the ground! Three-fingered sloths have two more neck vertebrae than any other mammal, allowing them to turn their heads through 270° and effortlessly keep their nose above water when swimming.

The two-fingered sloth's oversized stomach is supported by 46 ribs.

Sloths have the lowest metabolic rate of any mammal, which means that it takes them a long time to digest anything. They have an incredibly large and permanently full four-chambered stomach, which can account for up to 30% of their body mass. In two-fingered sloths, this oversized stomach is supported by 46 ribs (23 pairs) which is more than any other mammal!

7. They can starve to death on a full stomach

Unlike most mammals, sloths have sacrificed the ability to control their body temperature in order to save energy. Instead they are completely reliant on the environmental conditions, and their core temperature can fluctuate over 10°C during the course of a single day! If they get too cold, the special microbes that live in their stomachs can die, and the sloth can no longer digest the leaves that it eats. 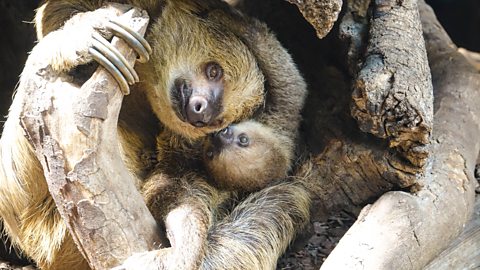 8. Sloths can fall 100 feet without injury

David Attenborough with a sloth in 1963

Sloths are anatomically designed to fall out of trees. On average, a sloth will fall out of a tree once a week for its entire life. But don't worry, all sloths are anatomically designed to fall and survive — they can plummet from over 100 feet without injury (that’s the height of twelve double-decker buses). When two sloths fight it is typically over access to a female for mating, and the aim of a sloth fight is to knock your opponent out of the tree.

9. They could cure cancer

Sloths have an unusual method of camouflage — cracks in their hair allow many different species of algae and fungi to grow which makes them appear green. Some species of fungi living in sloth fur have been found to be active against certain strains of bacteria, cancer and parasites! Sloth hair also provides home to an entire ecosystem of invertebrates ⁠— some species of which are found nowhere else on earth (like the ‘sloth moth’). A single sloth can host up to 950 moths and beetles within its fur at once.

10. No one knows how long they live for

Because sloths are so difficult to study in the wild, no one has ever followed an individual from birth until death and it is virtually impossible to accurately determine the age of an adult sloth. All we have to go on is the lifespan in captivity, but sloths do not do well outside of their natural environment. The oldest known sloth in the world just turned 50 years old and she lives at a zoo in Germany. We suspect that wild sloths actually live for much longer than this, but only time will tell.