Risking life and limb on the hunt for the tiger traffickers

I first met former Royal Marines Commando Aldo Kane 10 years ago, abseiling into a volcano to film the world’s largest lava lake. A decade later and I’m crawling through a jungle with him, trying to secretly enter a tiger farm. Neither of us is quite sure whether we’re more worried about being caught by potentially armed tiger traffickers, or getting mauled by a tiger.

I’ve never felt so exposed. Because it was an undercover investigation, we didn’t have the kind of back-up you would have on an operation in the Marines. We were faced with the real possibility of danger from criminal organisations; tiger farmers were shot on the street while we were investigating
Aldo Kane

It was inevitable that making a documentary investigating the illegal tiger trade would lead to some pretty sticky situations. So what on earth persuaded us to do it? With fewer than 4,000 tigers left in the jungles of Asia, we felt exposing the devastation caused by demand for ‘luxury’ tiger products like tiger bone wine was imperative before tigers become extinct in the wild.

Our mission, across six countries, was to gather evidence of the deadly and barbaric tiger trade.

This is how we did it – with more close shaves than I feel comfortable remembering.

Before we could set off on a series of fact-finding missions targeting the most prolific tiger farmers and traffickers, we needed to do months of research into the criminal networks that traffic tigers.

We trawled through the financial and criminal records of the individuals running the farms. Obtained maps of the locations. Figured out where best to approach so as not to be caught…

The result was a total of two months on the ground carrying out surveillance and undercover missions to document how the tiger traffickers work. That meant endless dawn calls, spending hours in ditches, getting eaten alive by a smorgasbord of insects, evading guard dogs and infra-red CCTV.

The result was a total of two months on the ground carrying out surveillance and undercover missions to document how the tiger traffickers work.
Laura Warner

2. Capture the evidence on camera

It wasn’t enough for us to witness what was going on. We needed to document it and getting cameras into the locations was extremely tricky. We used a number of techniques from hidden buttonhole cameras, to camera traps placed around locations. Ultra-long lenses and small DSLR tourist type cameras with remote sound recording devices for some of the more dangerous missions.

Aldo obviously has his commando skills to draw from, so fording rivers, trekking through thick jungle in tropical rainstorms and jumping over 3-metre high walls all came naturally to him. I, on the other hand would find myself – and the cameras – getting stuck in tree branches, and repeatedly falling off walls – not quite the model of stealth Aldo is used to working with.

It wasn’t enough for us to witness what was going on. We needed to document it and getting cameras into the locations was extremely tricky.
Laura Warner

There were a few choice incidents when we thought our luck had run out and we would be caught. Thinking about them still gives me goosebumps.

One was in China. Filming there is dangerous on a number of levels. There is a high threshold of evidence needed before we would attempt to film in these conditions, but our extensive research showed grounds for suspicion.

Sneaking around at night, evading guards and infra-red CCTV was never going to be easy. At one suspected tiger bone wine-making facility, Aldo and I decided to go in under cover of darkness, but as we neared the suspected wine factory, we were spotted by a tiger farm worker. We managed to escape through a bamboo forest, which Aldo was at pains to tell me was full of poisonous snakes, thankfully none of them were biting that night. But jumping back out over the perimeter wall, I stumbled and fell, hurting my back and breaking the camera. Limping back to our waiting vehicle Aldo and I were both well aware that we’d had an incredibly close call. But we weren’t to be deterred.

Sneaking around at night, evading guards and infra-red CCTV was never going to be easy.
Laura Warner

Laos was also on our evidence hit list: for a small country, it has a large number of tiger farms. Our plan was to plant camera traps at all the major facilities at which we had evidence of the illegal trade in tiger parts, before going in and doing more serious investigations. But in this interconnected trade, news spread fast of our investigation. All the zoos rapidly closed their doors to visitors and doubled the guards at their facilities. It soon became clear we needed to leave the country, but not before we collected all our camera traps.

As we approached the road leading to the largest facility in Laos, our car was pulled over by a police roadblock. I jumped out the back of the van while the rest of the crew distracted the police. Sneaking through the jungle to the back of the tiger farm I started hunting for the camera traps. My panic rose as I realised that the trap was no longer there and must have already been found. Soon I could hear voices coming through the jungle.

Only after what seemed like hours crouching in the undergrowth, did the voices finally retreat and I could sneak past the police cordon and back into our crew vehicle. Within hours we made it over the border and out of Laos, but not before having to repeat the mission several times over, collecting the remainder of our traps from the other tiger farms.

Only after what seemed like hours crouching in the undergrowth, did the voices finally retreat and I could sneak past the police cordon and back into our crew vehicle.
Laura Warner

In Vietnam, months of investigations found us deeply embedded in tiger trafficking networks, many of whom had links to the government. We worked with veteran investigator Chao Doan who after months of risky undercover work managed to get his hands on some of the most distressing, but important, footage ever captured of the tiger industry.

Although many people understand the brutality of the ivory and rhino horn trade because of the shocking images of dead animals lying in the Savannahs of Africa, no such images exist of tigers being butchered. We knew these atrocities were taking place and as gruesome as it may seem, we felt it was vital the world witnesses what happens to these tigers behind closed doors.

Thanks to months of undercover work by Chao, we were able to capture the immensely distressing footage of a tiger being slaughtered. It is really the culmination of our investigation, working with other wildlife investigators and NGOs. We hope this incredibly powerful evidence of the barbarity of the tiger trade will trigger outrage.

Thanks to months of undercover work by Chao, we were able to capture the immensely distressing footage of a tiger being slaughtered.
Laura Warner

At the moment the rapidly growing tiger farm industry is driving the demand for tiger bone products in China and Vietnam. With products such as tiger bone wine becoming ever more popular and mainstream, sharing a bottle of tiger bone wine has become akin to cracking open a bottle of the best single malt whisky with friends after dinner. Customers believe that the bones will give them tiger-like strength, cure arthritis and boost their sexual prowess, none of which has been proven to be medically correct.

Through our work, and that of those we collaborated with, we hope to bring tigers to the top of the agenda both in the media and at governmental level. The evidence we gathered on the ground was presented at the UN Convention on International Trade in Endangered Species (CITES). It’s at this global political level where real change can be made.

The future of the wild tiger lies in the balance. We risked our safety in the hope that tigers will become more valuable in the wild than they are pickled in rice wine.

The future of the wild tiger lies in the balance. We risked our safety in the hope that tigers will become more valuable in the wild than they are pickled in rice wine.
Laura Warner 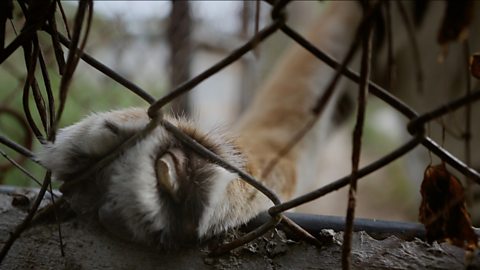 Watch Aldo Kane on his mission to expose the tiger traffickers

An investigation into illegal tiger farms in South East Asia

You can watch ‘Tigers: Hunting the Traffickers’ on the 4th March at 9pm on BBC Two and iPlayer.