How can I get more iron into my diet?

Not getting enough iron is the world’s leading cause of nutrient deficiency. Even in the UK where we have access to lots of sources of iron – many of us still don’t get enough. Men need around 8.5 milligrams of iron per day, whereas women need nearer to 15. If we don’t have enough iron in our bodies, it can lead to tiredness, heart palpitations and even problems with our immune system. 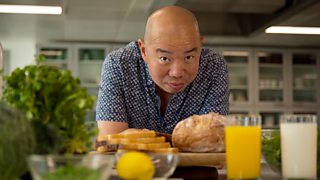 Our bodies can’t make iron, so we need to get it from food. The problem is that the iron in food comes in different forms and is sometimes wrapped up in chemical packages that make it harder to absorb. Red meat is a good source of available iron – we can absorb around 20-25% of it, but we can only access about 5-10% of the iron in vegetables. It can also be difficult for us to absorb iron from foods that have been fortified with it, such as breads and cereals.

We teamed up with Prof Paul Sharp to find out more about how much iron we can get from different foods. Using a cell model that mimics our gut, we put different foods, cooking methods and combinations of foods and drinks to the test.

Breakfast cereal – Surprisingly, what you drink with your fortified breakfast cereal can affect how much iron you’re likely to absorb. We combined fortified cornflakes with water, milk, coffee, tea and orange juice and put them to the test. We found that compared to water, orange juice increased the amount of iron that could be absorbed by about 65%, while coffee decreased it by around the same amount. This is because orange juice contains vitamin C which can help iron dissolve in the stomach, whereas coffee contains chemicals called polyphenols that can trap the iron, making it harder for our bodies to access it.

Cabbage and Spinach – We found in our tests thatgram for gramraw spinach contained almost twice as much iron as raw cabbage, but that the iron in cabbage was about 40%more available. This is because the iron in spinach is tightly wrapped up in chemicals called oxalates. Cabbage on the other hand, contains vitamin C which helps our bodies absorb iron. We also tested what happened to the availability of the iron when we steamed and boiled both these vegetables. With cabbage, the amount of available iron fell by a small amount when we steamed it, and by even more when we boiled it, because the vitamin C leached out into the cooking water. With the Spinach – the opposite proved true – lightly boiling actually increased the iron availability. This is because boiling is believed to help remove some of the oxalate that is trapping the iron.

Bread - Grain contains iron, but when the husk is removed to make white flour the iron is also removed. By law, white flour must be fortified with iron but not all of that iron is in a form that is useful to our bodies. When we compared three different breads; white (fortified by law), wholegrain and sourdough, they all contained similar amounts of iron but our tests showed that we’re likely to absorb 65% more from sourdough than from white. This is because grain contains chemicals called phytates which trap iron, but the fermentation process required to make sourdough bread breaks down the phytates and releases the iron.

The cell models that we used mimic the way our bodies digest food and are very good at comparing how much iron is absorbed from different foods and with different cooking methods. As humans, our ability to absorb iron will vary depending on lots of factors including our age, our health and how much iron we already have in our bodies. Using cell models allows us to make clear comparisons between different foods, without the results being affected by the complex and subtle differences that we would see in humans.