The toughest shoot in the Andes film involved filming the white-winged Diuca finch – also known as the glacier bird. It’s the only bird known to build its nest inside glaciers, and with a little trepidation, we took on the task of gathering the first-ever footage of this behaviour. 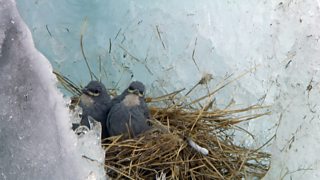 The finch’s glacier nests were first discovered in 2008 and since then had only been witnessed a handful of times, by scientists working on Peru’s Quelccaya Glacier, which tops out at a lung-busting 5,700 metres.

Everything needed for the two-week expedition needed to be carried up to Quelccaya on horseback – food, tents, generators… and over 20 cases of camera equipment.

On the glacier, the amount of oxygen in the air was 50% of what it is at sea level. Even though we had acclimatised to altitude to some extent, we were short of breath, low on energy and struggled to sleep – and it was freezing!

The nest was half way up an ice cliff. We could see the parent birds flying in and out of the hole and hear the excited chick calling inside, but had no way of actually seeing the nest itself. However we had prepared for this and brought a remote controlled camera attached to a frame, which could be hoisted up the cliff face and suspended at the entrance to the nest.

We waited for the parent birds to leave – we’d been watching them for an entire day, and once the coast was clear, our Peruvian mountain guide Koky took the apparatus in his rucksack and calmly abseiled down the ice cliff to install everything. As the clock ticked down, he worked methodically to screw the frame into the glacier, balance the camera to give a level image, and connect up the power and picture cables in a filming hide at the base of the cliff. With 10 minutes to spare, he was done.

Inside the hide, we fired up the monitor and were overjoyed – the camera showed a clear, intimate view of the nest – and two young, super-fluffy glacier bird chicks were hunkered down inside. It was a real privilege for the team – the first time anybody had seen inside a glacier bird nest like this. After months of planning, and a huge team effort in extremely tough conditions, we were finally ready to start capturing the sequence we’d hoped for. 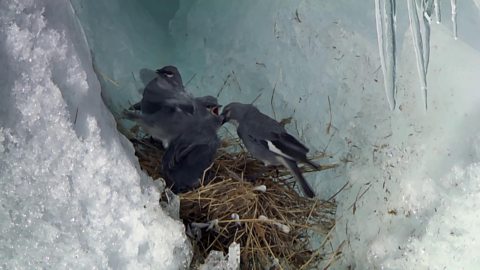