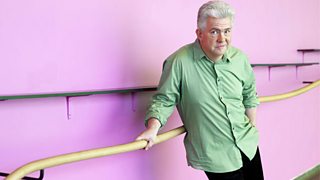 Words and music have always seemed like good pals to me.

We invite you to write a poem inspired by any piece of music in this year's Proms season. The winners in two age categories will be invited to attend both the concert and the Prom Plus before the concert on Thursday September 12th 2019 and hear their poems read by an actor for broadcast that night on BBC Radio 3.

From a past winner:

Meredith Andrea, who won the 19+ competition in 2017 with her poem, ‘Giving Birth to Monteverdi’, says:

‘The competition gave me an opportunity to participate creatively in the Proms by writing a poem inspired by Monteverdi’s Requiem. When it ended up being broadcast together with other Proms-inspired poems from the competition I felt amazingly connected across time and space to the composer, musicians, fellow-poets and listeners - such an affirming experience.’

The winner of our 19+ category is Rachel Curzon whose poem GRASS LIKE HIS MOTHER was inspired by Brahms’ A German Requiem.

though not the brittle shiftings
of a parched field,

those stiff yellows
scorched to dessication,

but the grass that leans,
restive, into crosswinds

and that beckons winter sun
to touch it gold.

Grass like his mother
praying at her sickroom window,

palms against the pane,
and blazing –

every finger bright
with light, or grace.

The winner of the 12-18 category is 18 year old Annabelle Fuller. Her winning poem, Ode to Oud, was inspired by the world premiere of Jessica Wells’ Rhapsody for Solo Oud heard in the Ancient Rituals and New Tales Prom.

sliced like a pear.
pips pop between the strings and frets
and slide like incensed sand into my hair.

stone-walled and mortar-bared,
black, dusty, spare, breeze-borne,
like a rhythm running through a shadow, then ensnared.

mouth closed, the breaths of agar trees
remember the strip of bark and splay of leaf,
motions tressed and burdened like a frozen frieze.

if I touched its warble I’d feel musk,
taste something coloured like sultana skin
and hear the breaking bawl of burnished husks.

it’s gargling a throat of hot perfume.
spat at my helix, its dripping clothes my earlobes,
wandering wild, like a wave of wine in a sober room.