Making Britain’s Deadliest Rail Disaster: Quintinshill, we were faced with a problem: to recreate and investigate the events of one hundred years ago as accurately as possible.

Using our smartphones, we could begin to visualise what a soldier staggering around the wreck might have seen

Documentation about what the crash actually looked like was thin on the ground. We could find little more than a handful official descriptions and a few rough sketches.

To really get a picture of what happened and understand this terrible incident in the railway’s history, we decided to build a recreation of the crash using a model train collection. We laid it all out in a large hall, complete with points, trains and a signal box. And with the help of the programme’s designer, rail enthusiasts and a whole lot of books, we pieced together the story using a train set, a tape measure and a variety of cameras.

We discovered the camera lenses of our upside-down smartphones were at approximately the same height in relation to the model as a human’s point of view in the real world. We could then begin to visualise what a soldier staggering around the wreck might have seen.

We also wanted to find out what the view of the trains would have been like from the signal box. By making careful scale measurements we discovered that, although the trains passed directly in front of the signal box, the all-important local train was partially obscured by other trains on the tracks outside.

Not only was it a simple, old-fashioned solution to the filmmaking problem of visualising a century-old event, but it also gave us a set of photographs of the model that were used extensively in the programme’s graphic sequences.

Only after the model had been put away did we discover an extensive drawing of the crash hidden away in the archives. Fortunately, it matched! 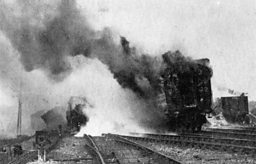 Suggestions that some trapped soldiers were shot by their own officers have long been denied by officials. Now, one hundred years later, one of the most senior veterans of the Royal Scots shares his thoughts:- 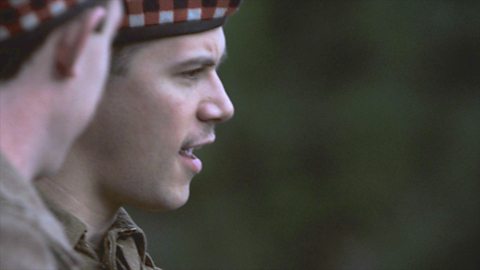 A Royal Scots veteran considers reports that officers shot their own men at Quintinshill.