The Mezzotint: Mark Gatiss on why ghost stories are still perfect for Christmas

Mark Gatiss turbocharged his career as a dramatist on Sherlock and Doctor Who, and last year delivered an acclaimed adaptation of Dracula. In recent years Gatiss has revived the TV Christmas ghost story tradition with ratings hits including Martin's Close and The Dead Room. He adds a chapter to that body of work this Christmas Eve with a trademark classic MR James story, The Mezzotint. 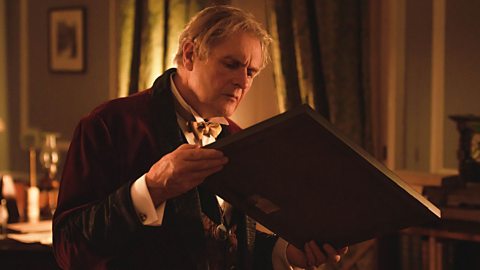 In 1923, Edward Williams receives an engraving, but the picture is not what it seems.

The Mezzotint, a half-hour drama based on a short story by MR James first published in 1904, is the latest Christmas ghost tale from Gatiss, following the success of classic James adaptations Martin’s Close (2019) and Tractate Middoth in 2013, and original scripts The Dead Room (2018) and The Crooked House in 2008. BBC Arts spoke to Gatiss in 2018, as production wrapped on The Dead Room, to try to get to the heart of what makes the tradition special - and necessary.

For Christmas 2021, Gatiss planned to write and direct an original ghost story but, as he told Radio Times, “it was very grim, set in a hospital, largely concerned with old people dying, and I thought, 'I think now what we need is another MR James!'”.

There’s a slow accumulation of dread. It really does exert something very special if you get it right. If you don’t overdo it, it brings you to a very particular place of fear.
Mark Gatiss on Christmas Ghost Stories

His adaptations embrace the reticence of the original A Ghost Story For Christmas strand, which aired primarily on the BBC in the 1970s. Those spooked the young Gatiss, and ultimately inspired him to continue the tradition. They were mainly directed by Lawrence Gordon Clark, who appeared in Ghost Writer, Mark's 2013 documentary about MR James, which viewers can also watch on BBC iPlayer this Christmas.

“There is no music. The score is entirely created from sound effects. I love that about Clark’s Ghost Stories. They’re very spare. You don’t see the ghost for a long time, and there’s a slow accumulation of dread. It really does exert something very special if you get it right. If you don’t overdo it, it brings you to a very particular place of fear.”

Rory Kinnear as Williams in The Mezzotint

The rules of the genre

Not far into Mark Gatiss’s supernatural tale The Dead Room, the lead character, a seasoned ham called Aubrey Judd played by Simon Callow, decides to explain the essence of the ghost story. 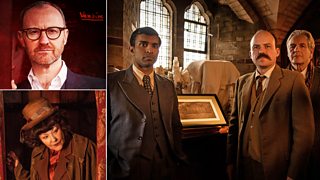 Clockwise from top left: Mark Gatiss; Nikesh Patel as Nisbet, Rory Kinnear as Williams and Robert Bathurst as Garwood in The Mezzotint; Frances Barber as Mrs Ambrigail in The Mezzotint

1923. In the heart of an old English college, Edward Williams receives an engraving of an unknown country house with an imposing facade, a sweeping lawn - and, just perhaps, something else.
The Mezzotint

Aubrey, an actor no longer at the peak of his fame, has been “bringing mild disquiet to radio listeners since 1976”, and understands the formula.

First of all, there must be calm. “And into this apparent calm... the Bad Thing rears its ugly head.” The story, to work, requires restraint. “Hold back,” Aubrey suggests, “always hold back until the climax.”

The innuendo is deliberate, of course, because Aubrey is an inappropriate old luvvie, and Gatiss is using him to explain the rules of the genre, as set down by MR James. Gatiss recalls:

“I used to do The Man in Black on Radio 4 Extra. That was a big moment for me, because Valentine Dyall did it during the war and it was a very famous thing. The producer was always asking me if I’d write one of the stories. I said, 'All right, I’ll do the very last one - I know what it will be. It's called The Dead Room, because it's set in this radio studio, and it should be about me being haunted, so it’s like a completely meta thing.'”

The idea lay dormant for a while, and then sprang to life when Gatiss was offered a low-budget commission by BBC Four. Suddenly, filming the making of a radio show made sense.

He says: “Then I thought, it's modern, so I want to make it about sound. Applying MR James’s rules, he thinks the ideal ghost should be from about 30 or 40 years ago. That means that the ghost needs to be from the 1970s. I don't think I’ve ever seen a ghost from the Seventies, and I thought, 'Hmmm, interesting'.”

James's other rules suggest that the ghost must be malevolent. “He had no time for friendly ghosts. And one of his big things is, of course, no sex. I broke that rule.”

For Gatiss, repression is clearly a a big part of James's work: “Modern psychologists have a field day with James's stories. There's an extraordinary moment in one of them when the protagonist puts his hand under the pillow. He’s telling it to a friend, and he says: 'It was a mouth, with teeth and hair, but not the mouth of a human being'. That’s one of my favourites. It’s entirely vagina dentata. He’s afraid of hairy things, of women, definitely.”

Simon Callow as Aubrey in The Dead Room

Mark Gatiss during filming for The Dead Room