Who feels lonely? The results of the world’s largest loneliness study

By Claudia Hammond, presenter of Radio 4’s All in the Mind

55,000 people took part in the BBC’s Loneliness Experiment in collaboration with Wellcome Collection, making it the largest survey of its kind in the world. And now we can reveal the results!

Here are some of the key findings:

1. Young people are the group who feel loneliest

There’s often a stereotype that loneliness mainly strikes older, isolated people. And of course it can. But we found higher rates of self-reported loneliness among younger people.

40% of 16 to 24-year-olds who took part told us they often or very often feel lonely, compared with 27% of over 75s. We saw higher levels of loneliness in young people across cultures, countries, and genders.

This is higher than in other surveys, but because the survey was online we had a self-selecting sample and might have attracted more people who feel lonely.

Our survey shows that loneliness can affect people of all ages. 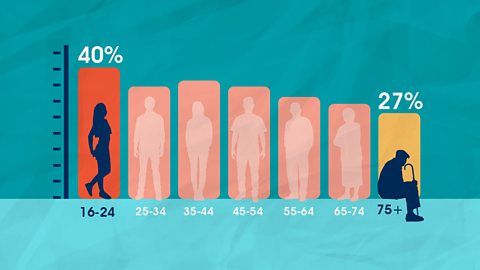 Claudia Hammond reveals the results of the 2018 BBC Loneliness Experiment.

2. People who feel discriminated against are more likely to feel lonely

We found that if people are made to feel that they are different in a negative way, levels of loneliness are higher. Those who filled in the version of the survey for people who are blind or partially sighted reported slightly more loneliness, particularly if they felt discrimination was high.

3. A third of people often or very often feel lonely

While 33% of people who completed the survey told us they often or very often feel lonely, 42% said they rarely or never feel lonely.

4. Being alone is not the same as being lonely

More than four fifths of people told us they like spending time on their own. And only a third believe that loneliness is about being on your own. However, people who said they were always alone were more likely to say they felt lonely.

We also found that people who live alone are only slightly more likely to feel lonely more often. This suggests that living alone isn't as much of a problem as spending lots of time alone.

Why might young people feel so lonely with such intensity?

There are a number of possible reasons why 16 to 24-year-olds reported the highest levels of loneliness in the survey.

Looking back, older people said that young adulthood was the time when they felt loneliest, so perhaps it’s not modern life which is making some people feel lonely. Perhaps this was always the loneliest stage of life.

More women reported feeling shame about feeling lonely than men. We also found that feelings of shame about loneliness go down with age and yet older people say they are more likely to conceal their loneliness than younger people. But the survey suggests people are in fact sympathetic to those who feel lonely.

We asked people a series of questions on social empathy - how sorry they would feel for someone who had not been invited to a party or had just split up from their partner. We found that people who feel lonely seemed to have a greater understanding of what it might be like to experience these things.

7. People who feel lonely have on average lower levels of trust in others

They also had lower expectations of friendship, so perhaps they feel they have been let down in the past. 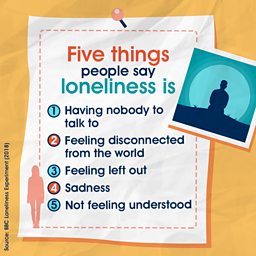 People who report high levels of loneliness don’t use social media any more often than other people, but they use it differently. They have more Facebook friends who they are only friends with online and who don’t overlap with their real-life friends.

Because our survey was a snapshot in time we can’t say that loneliness led to poorer health. Perhaps it’s the other way round and poor health is preventing people from going out socialising. But we did find that people who often feel lonely were slightly more likely to smoke, although the number of smokers in the survey was low. 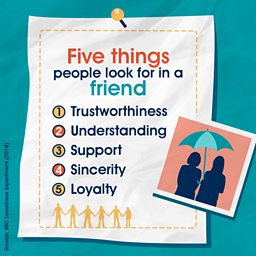 What are the solutions to loneliness?

41% of people in our survey said loneliness can sometimes be a positive experience but for many people it’s a feeling they’d like to experience a lot less. So we asked you which solutions have worked for you or others you know in alleviating loneliness and also which are the least helpful suggestions made by other people.

People identified dating as the least helpful solution suggested by others. The most popular solution was finding distracting activities or dedicating time to work, study or hobbies. Read about other possible loneliness solutions in our article, Nine ways to feel less lonely, or listen to our podcast mini-series, How You Can Feel Less Lonely (available from Tuesday 2 October).

More from All in the Mind