The best moments from Radio 2 In Concert 2019

Watch highlights from each gig below and find out how you can catch-up with more of the performances.

Dido's debut performance for Radio 2 In Concert, which took place at the BBC's Maida Vale studios, was her final show of 2019. And what a way to sign off the year!

The multi-million selling artist showcased classic cuts like 'Thank You' and 'White Flag' in an intimate setting, bringing 2019's In Concert series to a stunning close.

Watch Dido perform 'Here With Me'

Watch Dido perform 'Here With Me'

Robbie returned to Radio 2 In Concert for the first time since 2016 with a special show featuring tracks from his new Christmas album 'The Christmas Present'.

The legendary singer also shared hilarious anecdotes – including the time he got beaten to a No.1 spot by Mr. Blobby in his Take That days – before closing with classic cuts 'Angels' and 'Feel' and a cover of 'Merry Xmas Everybody'. It would take a massive Scrooge not to feel Christmassy after watching his In Concert. 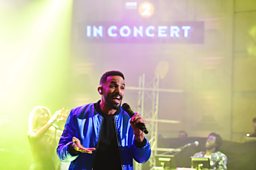 It has been 20 years since Ivor Novello and MOBO Award winning artist Craig David's debut album, 'Born To Do It', and the R&B star was in the mood for looking back during his debut In Concert performance.

Classic garage cuts like 'Rewind' blended in with a cover of Justin Bieber's 'Love Yourself', and modern pop hits like Bastille collaboration 'I Know You'.

Jeff Lynne's ELO made a momentous return to live performance with their first full gig in 27 years at Radio 2 Live in Hyde Park in September 2014. And Jeff returned to Radio 2 In Concert this year for the first time since 2015, with a mix of classic tracks and songs from new album 'From Out Of Nowhere'.

He's had a long and glittered career, but you'd still be hard pressed to find a more uplifting song than 1977's 'Mr Blue Sky', which closed a brilliant set.

Watch Jeff Lynne's ELO perform 'From Out Of Nowhere'

Watch Jeff Lynne's ELO perform 'From Out Of Nowhere'

Stereophonics returned to Radio 2 In Concert for the first time since 2013 to perform tracks from new album 'Kind' and some of their greatest hits, ahead of a UK arena tour early next year.

The Welsh group were in high spirits at the start of November, celebrating their seventh No.1 album. And they drew from some of their biggest hits – from 'Have a Nice Day' to 'Dakota' – to mark the occasion.