‘My tattoos shouldn’t stop me from becoming a surgeon’

I am a heavily tattooed man. I got my first tattoo at 19. It was ‘Tom Jones’ written in Chinese on my ankle. Since then, I have added more than twenty other tats. They range from a tapir on my thigh to tattooed brain scans on my right arm. And I have big plans for my future ink work, including a full sleeve tattoo on my left arm, made up of artworks by Vincent van Gogh, Salvador Dali, Andy Warhol, Picasso and others.

Aside from my love for tattoos, I am also a medical student. One day, I want to be a surgeon. 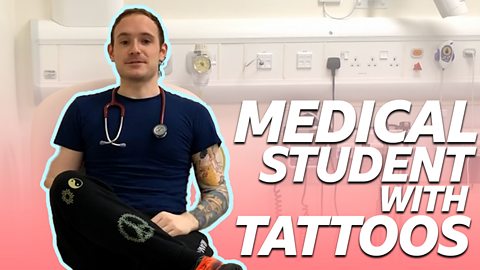 Life As A Tattooed Medical Student

Scott looks at the perceptions around doctors and surgeons who have tattoos.

In 2016, University of St Andrews research suggested that people are more likely to trust mechanics with tattoos than surgeons with tattoos. This is ridiculous because surgeons are just meat mechanics, and I will fight anyone that says otherwise.

Even within my profession, a survey by my own university, Dundee, suggested that medical workers believed tattoos affect professionality. Which means when I reach my hand out to my teachers, they may have already made a decision about me based on how I look, and not based on my passion, knowledge, training, or decision making. If these surveys are correct then I could be in an interview and not get the job because of my gnarly tattoos. But, to be honest, if you’re not hiring me because of my tattoos, I don’t want to work for you anyway.

That research carried out at the University of Dundee, did however find that whilst current staff may have problems with tattoos, some students didn’t. This gives me hope that things are changing and that, by the time I’m a consultant, tattooed medics will be as common as bearded hipsters in barbers. I do know a growing number of medical students with tattoos but many have them where they can still be covered. I believe this is down to worry that they will be professionally prejudiced. I don’t know if I would have gone for visible tattoos if I had known that it could impact my career.

When you look up ‘dress code policy’ at individual NHS health boards, they normally read that tattoos do not need to be covered unless they are “deemed to be offensive”. This does make sense because I would not want to be treated by a doctor with a racist symbol tattooed on them, or an insult towards Tom Jones for that matter. 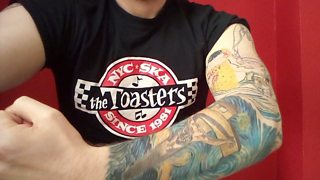 Sometimes people ask, ‘won’t patients view you differently because of your tattoos?’ Or, ‘will you cover them up on wards?’ To both I say, ”no”.

Firstly, as is NHS policy, I cannot have anything covering below my elbows in clinical areas. Any patient I see will catch a glimpse of both my lovely René Magritte and my incredibly cringey ‘Life is Art’ tattoo.

Secondly, the idea that a patient would have an issue with me because of my tattoos is ridiculous. No-one is ever going to be lying there with two broken arms saying, “sorry pal, but the line work on that’s a bit rough, could you find someone else to push down the plunger on my morphine?”

It would not happen!

Honestly, the biggest “tattoo issue” I’ve had is finding out that the anatomical heart, I have tattooed over my real heart, isn’t quite in the right place. I have lost so many nights sleep over that.

I think a lot of the stigma to do with tattoos stems over from the old perceptions of class. Traditionally, tattoos were inked on sailors and criminals, and you don’t get many poor working class Romany doctors, like myself.

I think this classism needs to change. I think we need to move on from the stereotype of old white men in lab coats swanning onto the wards directly from the golf course. I think we must modernise and recruit a diverse workforce from all backgrounds. And each worker can sport incredible tattoos if they wish. You must be the change you want to see.