This year’s BBC Reith Lecturer is Kwame Anthony Appiah, a British-born, Ghanaian-American philosopher, cultural theorist and novelist. Appiah specialises in moral and political philosophy, as well as issues of personal and political identity, cosmopolitanism and nationalism. 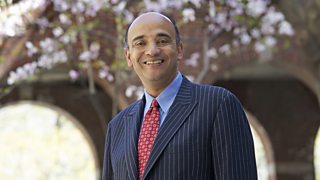 Not everyone accepts that you have to be a man or a woman; or that you can’t be both an Englishman and a Scot. You can claim to be of no religion or gender or race or nation. Perhaps, in each case, someone will believe you. And that is one reason why the way we often talk about these identities can be misleading.

His four lectures under the banner "Mistaken Identities" will focus on four themes: Colour, Country, Creed and Culture. They will be recorded in London, Glasgow, Accra, in Appiah’s adopted hometown of New York, and will be broadcast on Radio 4 in October and November.

Kwame Anthony Appiah was born in London but moved as an infant to Ghana, where he grew up. His father, Joseph Emmanuel Appiah, was a Ghanaian lawyer and politician, as well as a Member of Parliament, an Ambassador and a President of the Ghana Bar Association. His mother was English: Peggy Appiah, besides being a novelist and children’s writer, was active in the social, philanthropic and cultural life of Kumasi. Their marriage, in 1953, was widely covered in the international press as one of the first “inter-racial society weddings” in Britain. As a child, Appiah spent a good deal of time in England, living with his grandmother, Dame Isobel Cripps, widow of the English statesman and Labour Chancellor, Sir Stafford Cripps.

After studying at Cambridge, Appiah taught at some of the world’s top universities including Yale, Cornell, Duke, and Harvard, and lectured at many other institutions across the world. In 2014 he became Professor of Philosophy and Law at New York University, where he teaches both in New York and in Abu Dhabi.

Appiah believes there are profound sources of confusion in our thinking about identities. Indeed, almost every identity grows out of conflict and contradiction, and their borders can be drawn in blood. And yet they can also seen to fade in the blink of an historical eye. The demands of identity can seem irresistible at one moment, absurd at the next. Most of us swim easily in the swirling waters of our multiple affiliations most of the time, but we can be brought up short in moments when the currents of identity tug us excruciatingly in opposite directions.

He adds: “In these Reith lectures I want to explore some of these confusions through an examination of four central kinds of identity: creed, country, colour and culture. Through the lives of particular people in particular places and times, we’ll see how the confusions play out, but also how they can be cleared up. We’ll learn how those identities play both positive and negative roles in their lives and in ours, and how we might escape some of the negatives if we understood some of the many mistakes we make about identity.”

Appiah shares homes with his partner, Henry Finder (editorial director of the New Yorker magazine) in New York City, and near Pennington New Jersey, where they have ducks, geese and some fish. In August, 2011, after more than a quarter century of partnership, they were married in New York City, two weeks after same-sex marriage was recognised by the state.

More from The Reith Lectures