Astonishingly, by December 1914 one third of the men fighting in the trenches were from India. And, in an extraordinary chapter in the war, injured Indian soldiers began to arrive at the Brighton Pavilion, which had been converted into a hospital for them. Dr Blighty, a brilliant production mounted by Nutkhut at the Brighton Festival, dramatically recreated this remarkable moment. 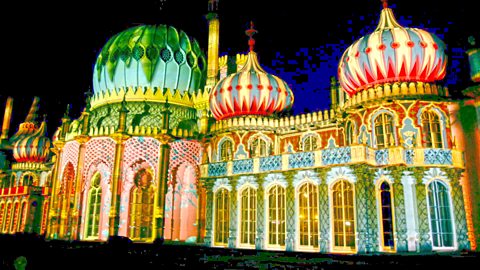 Film by Spike Geilinger of Cinestre Films for BBC Arts

The history behind Dr Blighty
by Spike Geilinger

102 years ago, in December 1914, the first patients arrived at Brighton’s Royal Pavilion which, along with several other buildings in the city, had been converted into a military hospital for Indian soldiers.

A spectacular event was staged in the grounds as part of the Brighton Festival to commemorate this little known episode in the life of this remarkable building. It involved dramatic reconstruction, musical performance and an extraordinary projection light show on the building itself.

When World War One broke out there was no shortage of recruits to the British Army, but while these men were being trained the government turned to the Empire for support. Divisions from the Indian Army were shipped to France, landing at Marseille and travelling north to the front lines.

This was the first time the Army had been deployed outside India; by the end of the year Indian soldiers made up a third of the forces in the British trenches and they formed half of the attacking force in the Battle of Neuve Chapelle on 10-12 March, 1915.

Equally pressing was the need for hospitals to treat the inevitable casualties from France; Brighton was chosen to receive wounded men from the Indian Army. The British, having ruled India for over 100 years, were aware of the need to accommodate the various religious and cultural needs of the wounded men.

The ‘Hindu’ architecture of the Pavilion was seen as a serendipitous bonus but they made every effort to provide space for worship and to respect the needs of the men’s various religious faiths. This required complex plumbing arrangements with separate water supplies and the setting up of nine kitchens.

This new use for the Pavilion was seen as a terrific propaganda opportunity. In the Indian press it was suggested that the King-Emperor, George V, had given up his own palace to house the Indian wounded. The War Office organised a local photographer to take staged pictures of the men being cared for in palatial surroundings. The intended message for consumption back in India was that the British greatly valued the Indian contribution to the war effort. These pictures also became something of a sensation in the UK.

Indian soldiers at the military hospital in Brighton

It seems the people of Brighton enthusiastically welcomed these exotic strangers. In many ways this was an important moment for British race relations - the presence of so many young Indian men in a British city helped to create a shift in attitudes.

It was the first time that significant numbers of Empire citizens had met British people in their own country, and not as members of a ruling elite. The authorities soon became nervous about their ability to control this interaction. Initially servicemen were allowed to mingle with the locals, but restrictions were later imposed to avoid the possibility of any 'inappropriate connections' being formed. A fence was erected around the grounds - with the stated aim of ensuring the privacy of patients.

As the war in France progressed the recruits of Kitchener's Army became available. The Indian Army was withdrawn from Europe and sent to fight the Ottoman Empire in Mesopotamia (modern day Iraq), a field of operations to which they were felt to be better suited.

The special cooking facilities and water supplies at the Pavilion were dismantled and the building became a convalescent home for wounded British officers. A curious episode in the history of the British and their Empire came to a close.

Dr Blighty was produced by Nutkhut for the Brighton Festival 2016 and is part of 14-18 NOW, the UK's arts programme for the First World War Centenary.

Actors perform in the gardens of the Royal Pavilion, Brighton

Wounded Indian soldiers outside the military hospital in Brighton