In the 21st Century, we’re well used to seeing people wearing pyjamas when doing their shopping or the school run, but back in the early 1900s it was practically unheard of for a woman to wear PJs at all — even in the bedroom.

It took the Zeppelin air raids across parts of First World War Britain to prompt the marketing of pyjamas to women, as explained in the BBC Radio Scotland series Time Travels:- 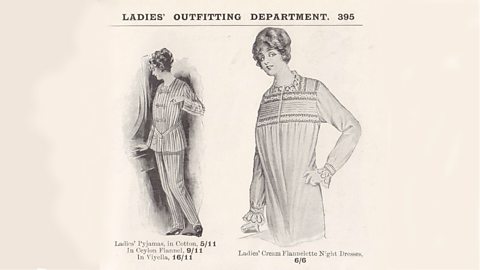 The Great War was the first time it became acceptable for women to wear pyjamas to bed.

Lucie Whitmore, a PhD Researcher at University of Glasgow, described “the huge change in lifestyle” that surrounded events of World War One and was responsible for changes in women’s fashion. 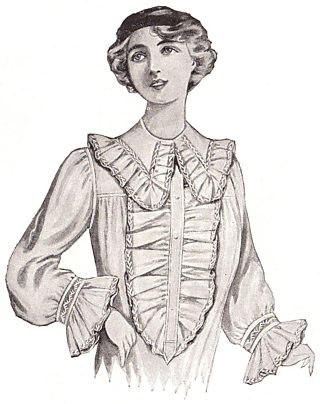 Would it not be better to run out and look at the zeppelin in a pair of tasteful blue pyjamas and a pair of scarlet, Turkish slippers?
Manchester Guardian, October 1915

“Before the turn of the 20th Century, both men and women would have quite often worn nightgowns, so even pyjamas for men were relatively new around 1900.”

Zeppelin air raids began in 1915, meaning women and children could suddenly become victims of war in their own beds.

“Magazines started suggesting that women should either wear more practical nightwear – should they have to run from their beds in the middle of the night – or nightwear that really made them look presentable should they bump into their neighbours [out on the street] at 3am.”

Pyjamas were warmer and practical; their pockets were useful for storing things necessary in an emergency.

Another recommended garment was the sleeping suit – essentially a “First World War onesie” – which was also comfortable, practical and warm.

One St Andrews newspaper article reported that, prior to the war, women would have been thought of as “extraordinary freaks” if they wore pyjamas.

Although Lucie “doesn’t 100% agree” with the way these items of clothing were marketed, she explained that, by 1918, about a third of all women were wearing pyjamas to bed — demonstrating that the popularity of “slightly useless, civilian armour” had really taken off.

Women’s roles in World War One

The First World War also saw a massive shift in the roles of women within British society.

The absence of large numbers of young men resulted in women setting aside traditional expectations and instead taking on the sorts of roles required to keep the country running.