Sam Smith reveals the secrets of his new album, The Thrill Of It All

Sam Smith (you may have heard of him) set the world on fire with his debut album, In The Lonely Hour.

But no sooner than our tears had dried, he's back for a second round with new record, The Thrill Of It All.

After a sleepless night (Sam says it felt like he was "in labour" before the album dropped) he joined Nick Grimshaw on The Radio 1 Breakfast Show for a special listening party for the new album. 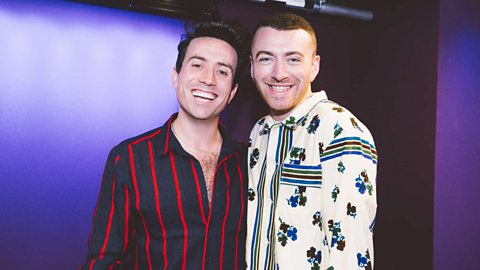 Grimmy talks to Sam about some of his favourite tracks from his second album.

Sam talked us through some of his favourite songs on the new album, shared some love for Fifth Harmony and told us what he got up to when he spent time in Australia. (Hint: It involved high heels).

Here's what he had to say about The Thrill Of It All.

Sam flew to Nashville to write songs for his album, teaming up on this track with Jimmy Napes (who he previously wrote Stay With Me with) and Tyler Johnson.

Heartbreak still kills me. It scares me every time
Sam Smith

But there was a fourth person in that room, at least as far as Sam was concerned.

"I kept writing songs about the guy who the first album was about," he told Nick.

"He kept coming back into my mind every now and then and I was just sick of writing about him.

Sam has made a career out of singing about failed relationships, but admitted that his success doesn't make things hurt any less.

"Heartbreak still kills me. It scares me every time."

Baby You Make Me Crazy

Sam says there are several ways to deal with getting dumped.

It's about my heart and my thoughts... It's not about them
Sam Smith

There's another option of course, and that's to go and have a big one with your mates and deal with the pain some other time. And that's exactly what Baby You Make Me Crazy is all about.

"So I got dumped, I got let go, someone made the wrong decision," he said.

"The evening it happened, I actually had the best night ever. I went out in Soho with all my friends and went absolutely mental.

"That's what this song's about, turning to the people you love and having a good time and you can deal with it tomorrow."

But while the song was inspired by an ex, Sam says all the songs on his new album are about him and his feelings - not the man who let him go.

"It's about me more than anyone else," he added.

"It's about my heart and my thoughts more than anyone else, it's not about them."

Following the success of Sam's debut album, In The Lonely Hour, he spent a lot of time in Sydney, Australia.

While he was there, he says he learned about LGBT culture and also wrote this powerful song for his new record.

"I wrote this song in a shower in Australia after gay clubbing all night in Sydney," he revealed.

"This song is a coming out story from a young boy to his father, but it's not about me."

Sam spent time partying in Sydney, but also expanded his own experiences as a gay man.

"I met my friend Trent there, who introduced me to LGBT history that I didn't know about," he told Nick.

Sam said that focusing on his music career when he was younger meant he explored this side of life later than most people.

"I didn't have time when I was younger to become a gay man and understand my community," Sam added.

"Sydney did that for me and this song came from it."

But there's one song on that album that remains shrouded in mystery, even now it has been released.

"No one will ever know what this one is about because it's so personal to me," he said.

So, what else did we learn from Sam?

Sam tests his new music on his family first

But they don’t always share the same opinions of the record-buying public.

But it was entirely his choice to use that photo.

"I wanted to put a picture out of myself that I didn't actually like all that much, so that's what I’ve done. I think it's a bit odd. I don’t think it's my favourite angle," he said. 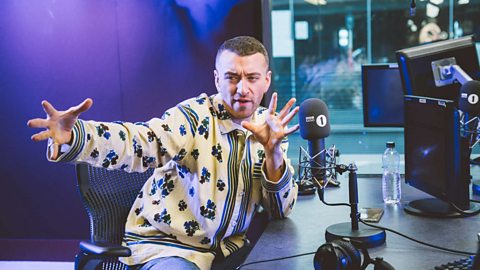 Turns out he's a huge fan!

His next tour won't be very rock and roll

Sam quit drinking (and cheese) three months before the release of his new album.

And he's not planning on getting back on it (the cheese) when he heads out on tour.

"I love a tour bus, I love getting into a routine and just seeing the fans every night is the greatest thing I’ve ever done in my life," he said.

"I'm going to be like a grandma on this tour, I’ll be in bed every night with a camomile tea."

Sam Smith's new album, The Thrill Of It All, is out now