Is yoga as good for me as aerobic exercise? 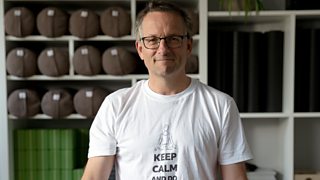 In the UK one in four of us have high blood pressure, or hypertension – a factor involved in half of all heart attacks and strokes.

It is well established that poor diet, lack of exercise, and stress can be contributing factors. Indeed, besides medication, common measures to lower blood pressure include reducing salt intake and doing aerobic exercise such as walking, running, or swimming.

But there’s a growing body of scientific evidence that suggests there could be another antidote – yoga.

While more vigorous, aerobic exercise is well known to lower blood pressure, it’s more surprising to think that gentle movement and breathing could have the same effect. So we wanted to put it to the test.

We teamed up with Professor Sanjay Kinra from the London School of Hygiene & Tropical Medicine who is an expert in cardiovascular medicine.

He was prompted to explore yoga as an antidote to high blood pressure when he discovered his cardiac patients were reluctant to take up aerobic exercise as an intervention for recovery. Indeed in the UK only 50% of people actually take up cardiac rehab.

In order to carry out our study, we recruited five volunteers, all of whom had a history of hypertension, or pre-hypertension, or anxiety, but were not currently on medication. Instead we sent them to a gentle yoga class for one hour, three times a week, for three weeks.

The yoga our volunteers were undertaking was low cardio yoga - a style called Viniyoga – composed of deep breathing, and gentle flowing postures that don’t increase the heart rate. We also wanted to test whether the yoga had any effect on our volunteers’ mental wellbeing.

At the beginning and end of the three weeks, our participants’ daytime and night-time blood pressure was monitored; and depression and anxiety were measured using questionnaires.

Group improvements were seen in total blood pressure across a 24 hour period. The volunteers who started the experiment with high blood pressure saw a fall of up to nine millimetres of mercury – around the same as you’d expect from doing the recommended amount of aerobic exercise. If they were to continue, they could see their blood pressure get close to healthy levels within two to three months.

Depression and anxiety in the group improved by 38% and 63% respectively.

What could this mean for the future? Should I give up my hypertension medication?

Whilst aerobic exercise is still recommended by GPs for high blood pressure, yoga may hold promise. But why should such gentle movement and breathing have this effect?

Professor Kinra explained that aerobic exercise works to strengthen the heart muscle, whereas it’s possible that yoga can achieve similar health benefits by relaxing the arteries.

Whilst our study was very small, and showed some improvement, other longitudinal studies with larger samples of people, have shown yoga to be as effective as more vigorous exercise in treating hypertension.

You should never stop taking medication without consulting your doctor – so if you have been prescribed drugs to control hypertension, it’s important to keep taking them. But regular sessions of yoga could, over time, reduce your need for them, and this is something you can discuss with your doctor if you think it could work for you.