'We've had more than 100 cycles of IVF between us'

As part of a special programme, The Emma Barnett Show spoke to 19 women who between them had gone through more than 100 cycles of IVF.

They spoke openly about the journey, described by some as "a rollercoaster", that many women go on to try and become mothers. 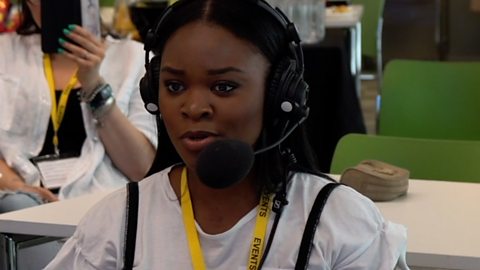 ‘I want to break the IVF stigma in black communities’

Infertility blogger on the IVF stigma in some black communities

Infertility blogger Vanessa Haye has had two rounds of IVF, one resulted in a miscarriage and her second was successful. She is now a mother to a one-year-old boy, Sebastian.

She wants to break the IVF stigma in certain black communities because of her own struggle to speak to women about her fertility issues.

“Being from an African/Caribbean background it’s very pro-natalist," she says.

“A lot of issues stems from deeply rooted historical facts about a black woman being super fertile.

“I had to seek out a community on Instagram.”

She feels “a huge amount of guilt” because she is in a position to be able to spend “a stupid amount of money” on IVF when most people can’t.

“Very generous-kind family members have helped us out and all of our savings,” she says.

Hannah is now considering going down the donor conception route.

"The goal is to be parents so shift the goalposts to get there."

Jessica Hepburn went through the IVF process 11 times before accepting it wouldn't work for her.

She's now turned her disappointment into a positive by running an IVF support group for others like her and now runs Fertility Fest.

Jessica says "I lost a decade of my life to 'project baby,'" because she says the nature of IVF is all-consuming.

“I was so ashamed and in such a dark place for a long time,” she adds.

In a bid to have her first child, Carolyn Lipcyznski took out an £11,000 loan. Not only was her sixth round successful, but after giving birth to her daughter Kayleigh the loan company paid off her loan in full.

“They had never heard of anyone getting that loan amount for IVF,” she says.

“It is desperation, it’s not just about the money, it’s your body clock. Time is not on your side.”

Carolyn had previously spent £20,000 on five rounds of IVF which weren't successful and was determined to have one more round.

She says she feels 'born to be a mother' and felt pain at the thought of not conceiving a child.

“You ache, your arms ache, it’s heartbreaking,” she says.

Katy Lindemann was told her womb was too damaged for pregnancy after four unsuccessful rounds of IVF.

During the whole process, Katy had 4 cycles, 7 cancelled cycles, and 2 miscarriages.

She says you feel like you have "no control" when going through IVF.

“It's like being in a car or on the bus - but you don't know the destination,” she says.

Click here to listen to the full programme, presented by Emma Barnett.