Filming micro-detail in the deep

By Orla Doherty, Producer on The Deep 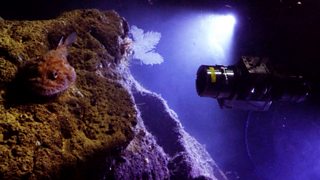 To get into the deep sea, you need a giant machine – either a ten tonne submersible or a remotely operated vehicle (an ROV), roughly the size of a van. Cameras are rigged to the outside of the vehicle. In the case of a submersible, the cameraperson sits inside using a combination of laptops, joysticks and hand controls to rotate, tilt, focus and expose the camera. In the case of an ROV, a team sit in a control room on the mother ship, manoeuvring the vehicle with a pilot and performing all the same camera functions through controls that send their signal through 3,000 metres or more of fibre-optic cable!

Some deep sea creatures are enormous. A sixgill shark is as big as a great white. Others are absolutely tiny – the shrimp that live inside the intricate lattice of the Venus’ flower basket sponge is smaller than your fingernail. So lining up a giant vehicle with remote-controlled cameras to a tiny animal proved to be quite the challenge!

To get the intimate portraits we needed to tell the full story of these tiny but amazing animals, we developed two approaches. The first was to build a macro-camera that could be manipulated on the submarine’s arm, so we could place it on the sea floor, for extreme close ups. But this work was painstaking and we could only ever achieve a few shots per dive. So we also collaborated with the experts – deep-sea scientists who have spent years studying the inhabitants of this alien world. They have developed methods of collecting animals from the deep – a manipulator arm which works like a steel claw but in the hands of a skillful pilot is as gentle as a light hand-hold or a contraption called a ‘bio-box’, a clever solution to gathering animals in the midwater.

When the animals come to the surface, their world has changed – the cold has become warm, the pitch-black has become light, and the pressure they normally live under has lifted. The scientists therefore work as fast as they can to return these animals to their normal conditions, in a dark, refrigerated chamber on board the ship. And it’s into that dark, cold room that we sent our camerapeople – wearing polar gear because they could be in there for up to 8 hours at a time! 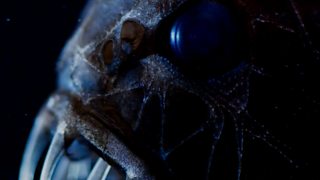 The results gave us the very best close-up portraits we could get. They might form only a tiny fraction of the Deep episode but we hope that they give the audience an intimate perspective on some of these most extraordinary creatures on Earth. The extreme close-ups allow us to tell the full story of the shrimp imprisoned inside the Venus’ flower basket; the portraits of fangtooth – the nightmare-inducing king of the Midnight Zone; and the incredible life that flourishes at the edge of the brine pool.